I heard rumblings that some people felt that Studio Series 86 (SS86) Hot Rod was better than Masterpiece (MP28) Hot Rod. It took me a while to get SS86 Hot Rod, because there were a few things I’d seen that were putting me off. But, after repeatedly hearing how good he was, I had to pick him up and see how he compared to MP28.

In this article, I’ll be comparing SS86 to the Targetmaster MP40 Hotrod, as well as the more movie accurate original MP28 release (collectively, MP). I’m doing comparing to both versions, because I just happened to have one of each in robot mode and alt mode, which helped when making a visual comparison.

So let’s take a look and see how they match up: 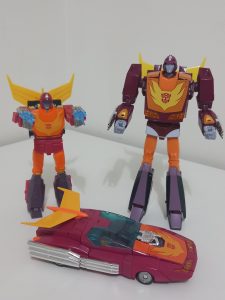 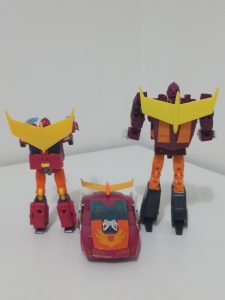 This is something that’s going to be personal to everyone, but I’m going to break down how I see it. When you look at SS86 on his own, he just looks like he’s jumped right out of the screen at you. One of the biggest things they’ve done well is the shape of his chest. The chest shape, particularly how flat it was, was a bugbear of many people when MP came out. However, when you have the two figures side by side, the painted details on MP’s chest/bonnet (both versions) just look so much bolder than SS86. The overall proportions of the figure are better on SS86, with MP’s waist looking a bit too small for his body.

When viewed from the back, MP is the clear winner because they managed to get the vent features into his back, and his legs are the same color all the way round. SS86 on the other hand has red calves which is far from screen accurate, and a couple of yellow pieces which look out of place on the knees and on a hinge on his roof/back.

The verdict: This is a tie. MP wins in term of color, boldness, and attention to detail (such as the whole of the lower leg being consistent, back vents, and chrome on his arm-pipes), but SS86 wins when it comes to overall proportions. 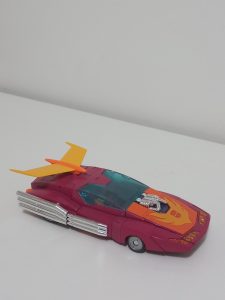 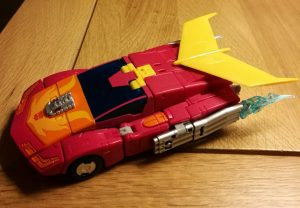 The big thing that put me off picking up SS86 sooner is that glaring piece of yellow plastic on his alt mode roof that just looks completely out of place. His feet also stick out of the rear of the car, but it doesn’t look as bad as it sounds, and his wrist cuffs from robot mode are visible in alt mode. None of this is an issue with MP, which is almost flawless in alt mode.

The verdict: The negatives of SS86 alt mode don’t seem as bad when you have him in-hand compared to how they look in pictures, MP wins this category hands down though.

Both figures have intelligent and fun transformations. I’m not a big fan of false chest pieces though, although I understand why they chose to use one for SS86, to make the robot mode proportions look better. MP scores points for me for being able to have no false chest pieces and be able to have the chest become the bonnet in car mode as it should, but the drawback to this is the effect it has on his robot mode proportions.

The verdict: This is a tie, both have fun transformations, which aren’t too stressful! 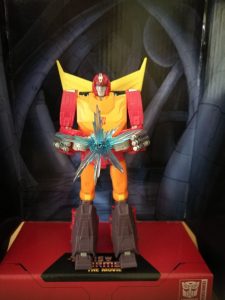 Both MP’s come with great accessories, such as the fishing rod and saw blade for the movie accurate version, and Firebolt for the Targetmaster version, as well as both versions having his pair of regular guns. SS86 wins this category big time though. Having the “depths of Unicron backdrop” and being able to display him with the Matrix and blast effect is just fantastic, as well as iconic! You also get the saw blade, his guns, and blast effects. I love how they managed to get his visor feature too, which is a carryover from the MP figures. I would have preferred if the blast effects were yellow rather than blue to be more movie accurate, but I can let that slide.

The verdict: You can’t beat being able to light our darkest hour! SS 86 wins this one.

It’s a tie. Both figures have aspects that outshine the other in some way. Ultimately it comes down to personal preference. From a visual aspect the movie accurate MP28 is going to be the go-to version for me personally. However, I will say this-there’s something intangible about the SS86 figure that you can’t describe. When you get him in hand he screams “awesome” at you and makes you smile! He’s good fun and while some of the visual aspects aren’t perfect, he’s got many plus points and is fantastic value for money.