This is the first Blurr figure I’ve ever gotten my hands on. He impressed me big time, and matched my expectations, although I found some aspects of his transformation a little challenging. 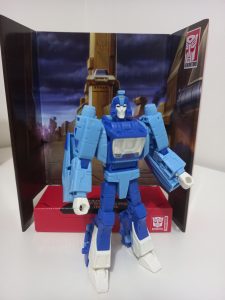 What can I say? This IS Blurr! While there are some gaping spaces on part of his arm that eventually becomes the side panels on the front of his vehicle mode, this doesn’t bother me in the slightest as the whole concept serves to create the silhouette that we’re familiar with when seeing Blurr on screen. His colors are vibrant and bold. 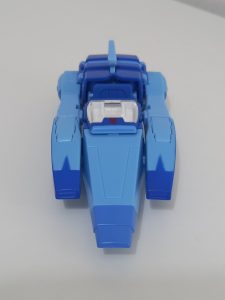 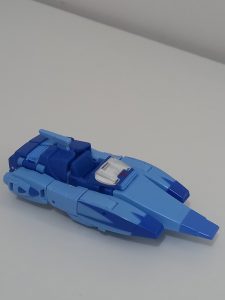 Visually, Blurr’s alt mode is just flawless. While he naturally doesn’t have wheels, as he’s a sort of hover-car, the way he transforms means that he’s perfectly balanced when he’s resting on a flat surface. He just looks fantastic.

Very clever transformation, particularly the steps involving the arms, which become the side panels of the car. I love how there’s no parts-forming and everything fits neatly in place. I had some challenges with his legs and the pegs that tab things in were very tight and stiff, making it hard to open his shins, and to peg things into place when his legs were fully transformed. It created one of those situations where you need to apply a decent amount of force, otherwise it just wasn’t going together, but you’re worried about applying too much force because you don’t want to break anything. This was only an issue when going from robot to vehicle though, when transforming the other way most things moved more easily – the only challenge being splitting the legs apart again as those pegs are seriously tight. 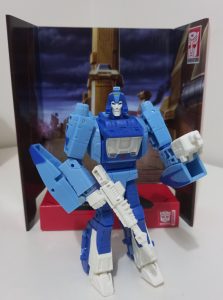 Blurr comes with an Autobot City backdrop. It’s instantly recognizable as the scene of the Decepticon attack in the 86 movie and recreates this perfectly. His gun is well molded and detailed, but I think perhaps his most fun accessory is the welding torch he used on the planet of junk when attempting to repair the crashed Autobot shuttle. Both of Blurr’s accessories can also be stored in his vehicle mode. 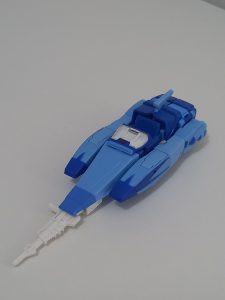 Fantastic figure, looks stunning in both modes, but I’d be concerned about transforming him too often due to the amount of pressure I felt was needed to peg some things together when going from robot to alt mode. It will be hard for me to resist transforming him again soon though, just due to how fun and clever the majority of it is!