This was one guy I wanted to pick up as soon as I saw him. Cyclonus has such an iconic and individual look, and the events of Transformers The Movie which led to his creation make him a unique character. Instantly I thought this figure looked great as soon as I saw him – but did he match my expectations? 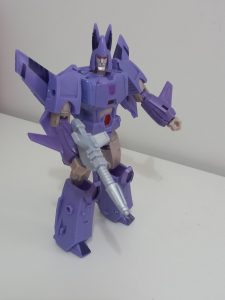 This guy feels super sturdy! Despite not being a Studio Series release, he really does faithfully recreate the look of the Cyclonus we first met in the 86 movie. Great attention to detail, the only drawbacks are the big homes between his knee joints and shins, but there are so many plus points, we can let this slide!

Just beautiful. Like seemingly everyone wo has tried to transform him, I can’t get the side panels next to his cockpit to sit flush with the body, and I wouldn’t want to force them, but it doesn’t detract at all from how fantastic his vehicle mode looks. 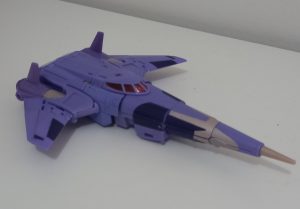 I love how they’ve done this without any parts-forming. His head and nosecone transformation is just pure genius. Mine was super stiff though, every joint was difficult to move into place, which made tabbing things in difficult, as well as compressing his upper legs into his lower legs. The way he transforms is very clever, and should be more enjoyable, but the stiffness of the joints was a big drawback for me as it made things harder than they needed to be.

Not much to report here, he comes with his gun, which is quite beefy and well molded.

This figure looks amazing in both modes, I can’t emphasise enough how sturdy and substantial he feels in-hand too. While he isn’t a Studio Series 86 release, he’ll look great alongside those figures. Just be careful when transforming, take your time and measure the amount of pressure you need to apply carefully if yours also has stiff joints.