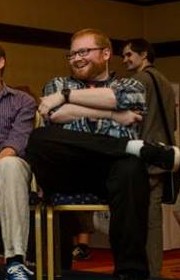 As well as regular books, his work has been most recognised by TF fans for his covers that have graced IDW’s ongoing titles, More Than Meets The Eye, various titles in the Spotlight series and many more. The chances are that if you have purchased any IDW comics, some will feature Alex’s work.

Alex will be with us at Auto Assembly all weekend and will be sketching for fans throughout the convention and if he is as busy as last year, we’d strongly suggest getting your requests in now so you’re not disappointed!