Hasbro Pulsecon 2020 has come and gone, and while the toy reveals mainly showcased toys that had been already leaked, media such as promotional posters seemed to hint at other toys to come up in later waves.

So, let’s start with what we know, what we think we know, and what our educated guesses say might still be coming. (Following pictures from Hasbro unless otherwise noted)

First, the Transformers Core Class: “Core Class” is the new name for the smaller “Legends Class.” For this line, there are three figures: Rattrap, Vertebreak, and Optimus Prime.

Some might wonder at why we are getting a new Rattrap figure when the Deluxe 2014 Thrilling 30 figure did such a good job of updating the figure. I would hypothesize that there are two reasons: the first is size. By shrinking Rattrap into the Core class size of figures, he will be more in scale with other Kingdom Beast Wars figures. The second is that Hasbro wants the entire Beast Wars Season 1 cast available on the shelf, rather than having newcomers turn to eBay for a fan favorite character.

Plus, if we’re being totally honest… the Thrilling 30 figure, while it is a great update, does take a bit of time to fiddle with to get into beast mode. By making a simpler, smaller Rattrap, this should make it easier for buyers to play with at home. 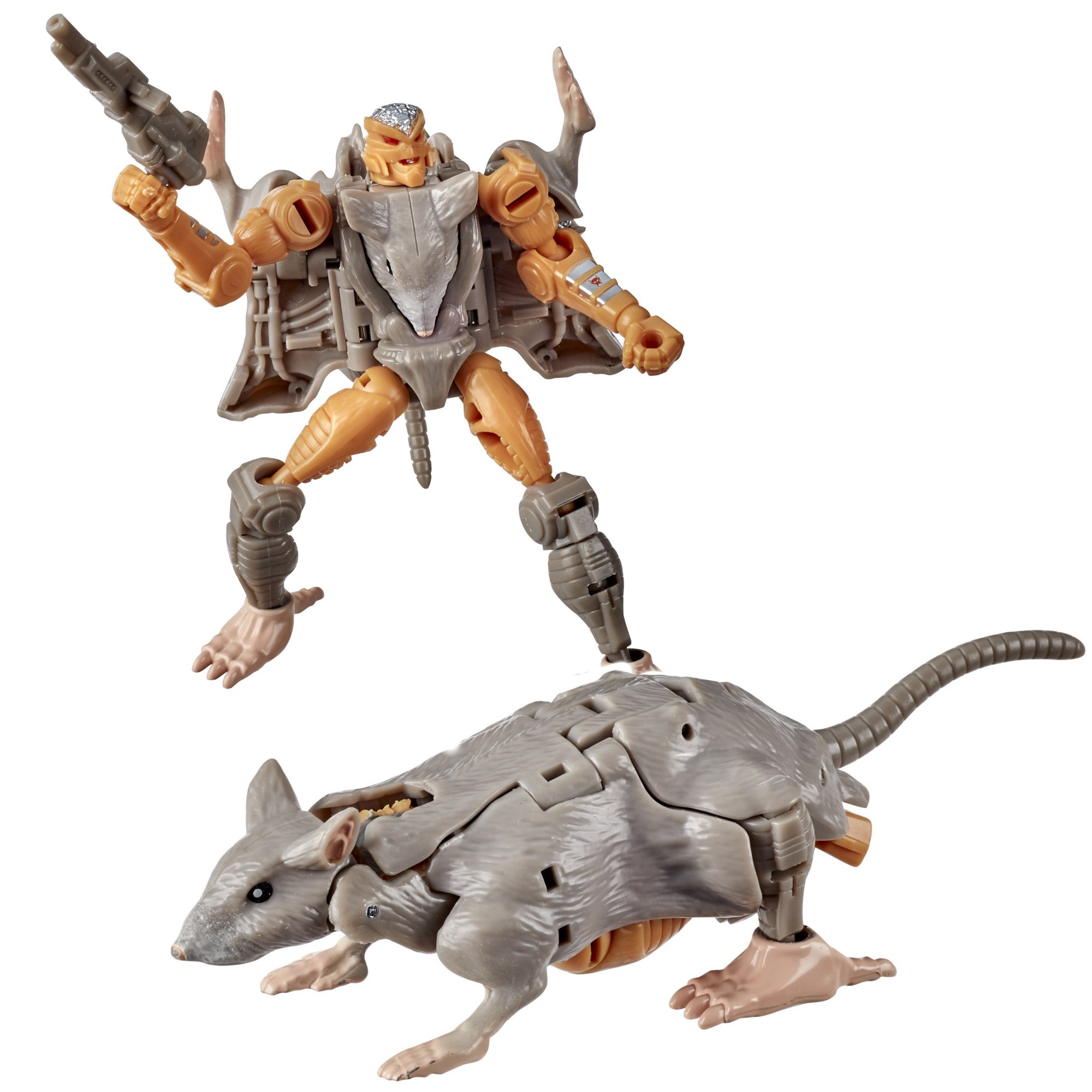 While the name Vertebreak was first used as the name of a Predacon in the Transformers Prime: Beast Hunters line, this Vertebreak, while still a Predacon, appears to be a brand new character. Based on the skeleton of a a Dracorex, Vertebreak is a “fossilizer,” a Transformer that turns into a dinosaur skeleton.

The type of dinosaur called the Dracorex may or may not have existed, with some paleontologists believing it might just be a young Pachycephalosaurus. Whether this is the case or not, the Dracorex is meant to be 20-30 feet long and weigh roughly 13,000 pounds… so I guess size isn’t exactly a factor with non-show characters. 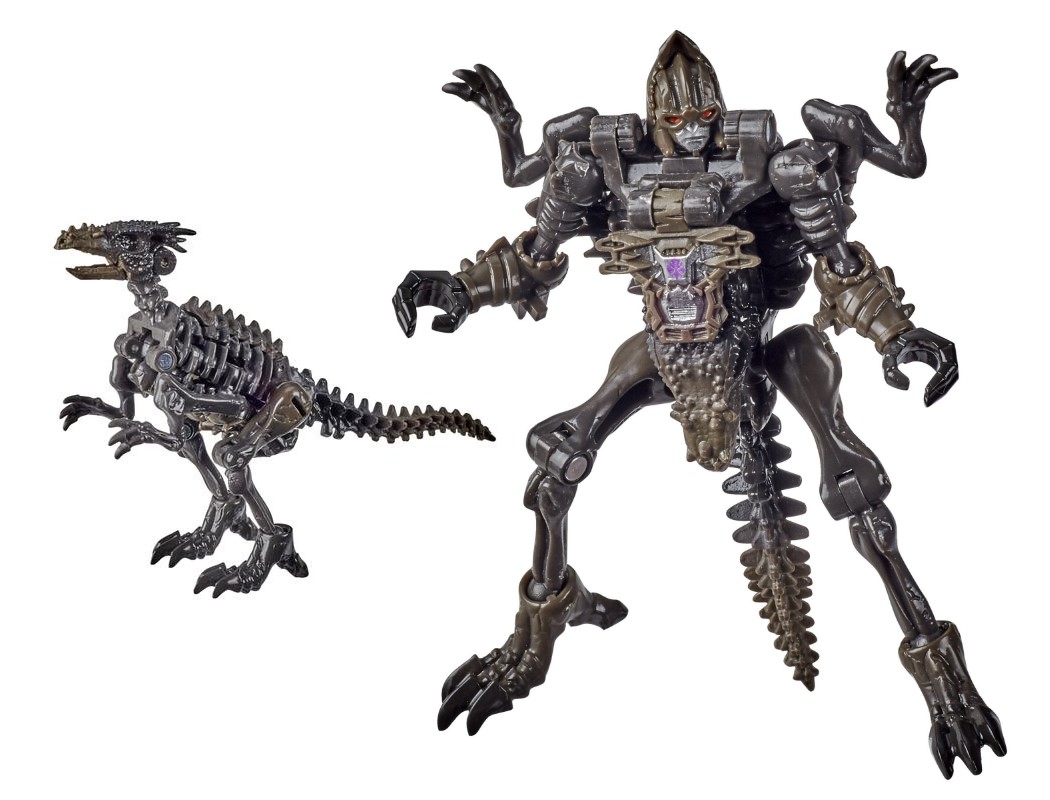 A mini Optimus, the designers revealed that they wanted a lower price Optimus Prime for children to be able to obtain, and one can see the logic in such a thing except when one considers all of the bargain price level “Authentics” figures that can be found in stores such as Dollar Tree. Perhaps this is meant as a figure to interact with larger, Titan figures? 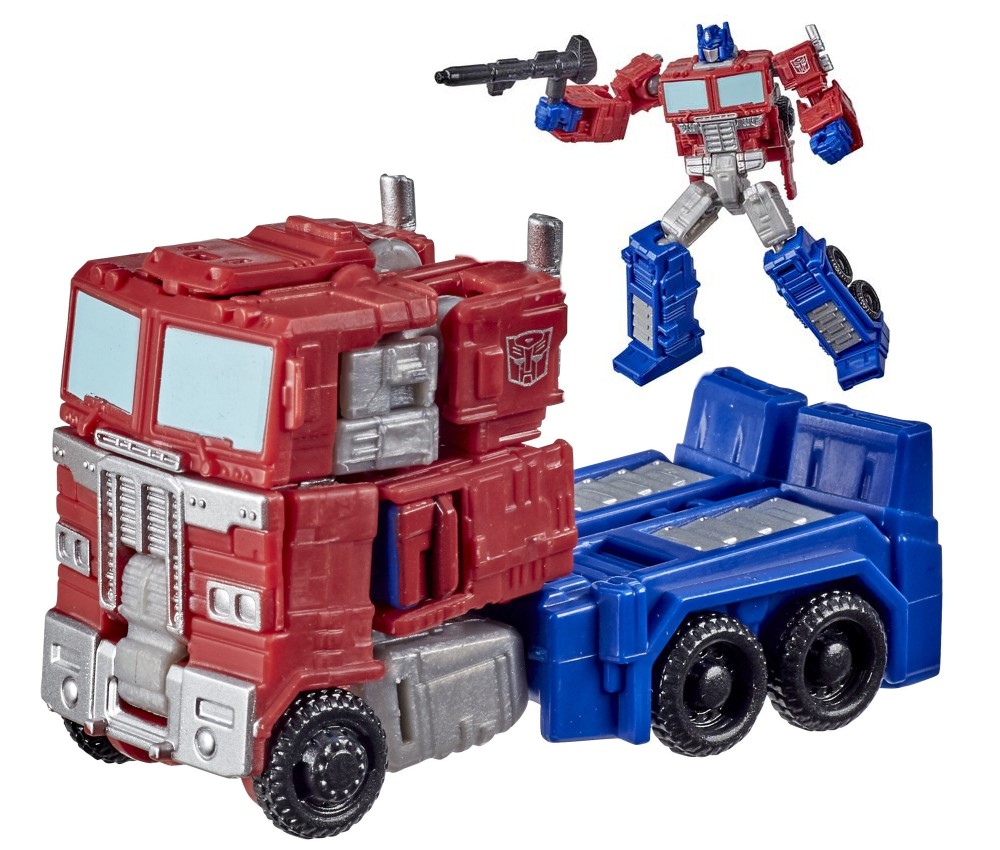 Second, there are the deluxe figures, which due to factory samples “escaping” and getting into the hands of reviewers, they had already mostly been reviewed, so we won’t spend too much time on them. These figures are Cheetor, Black Arachnia, Warpath, and Paleotrex.

While Cheetor did get an update as a deluxe class figure as part of Classics, that was way back in 2008, 12 years ago. With Cheetor becoming a more visible character in Transformers Cyberverse, and many younger fans not even being born when the Classics toy came out, it makes sense to create a new Cheetor toy. This one does look fantastic, with slim lines and an articled jaw.

The only issue I have with it is that for weapons we have a tail whip rather than a gut-gun. *sigh* 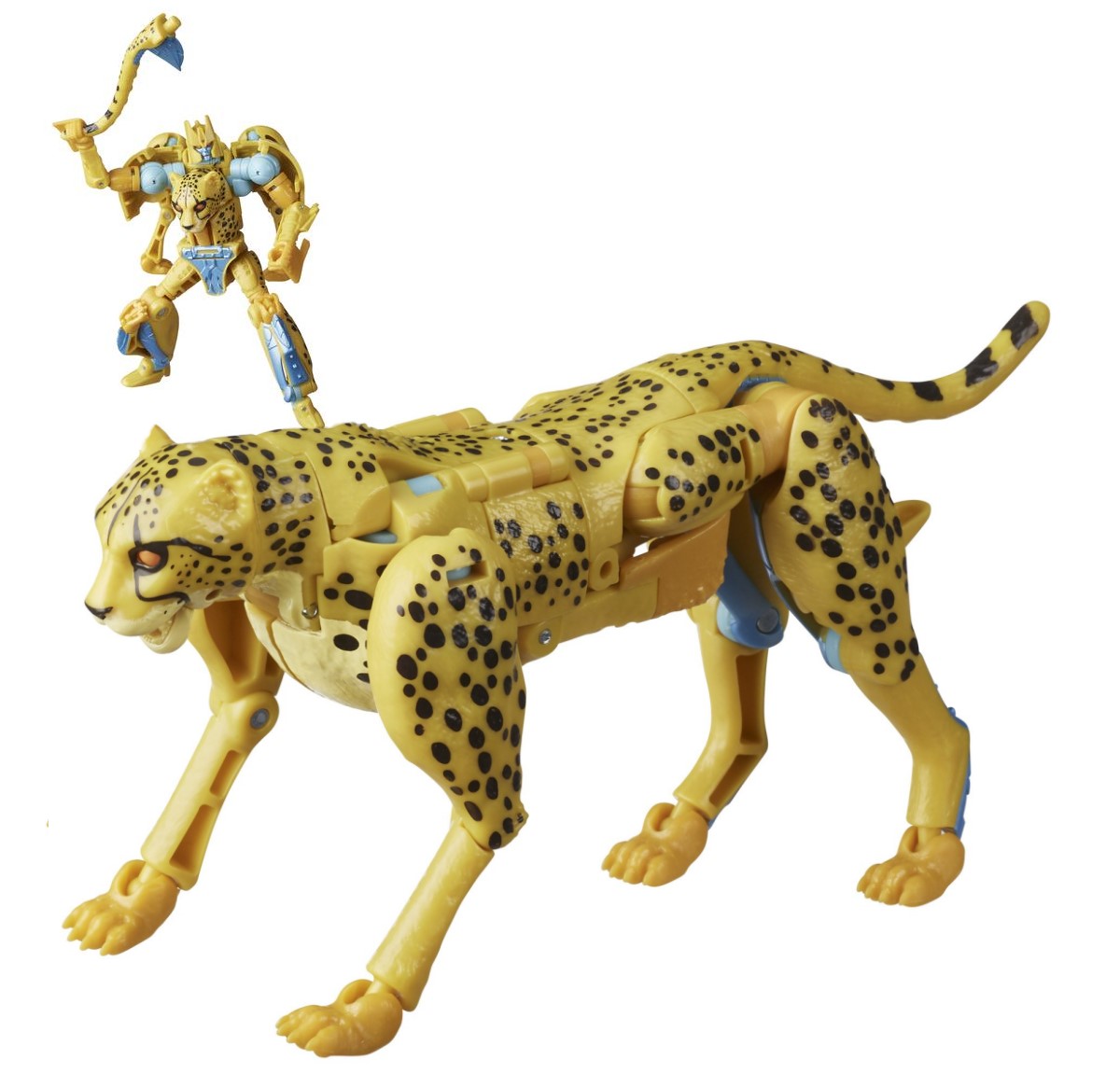 The female characters have been getting much more attention lately in the Transformers toy lines, so having Black Arachnia in a Beast Wars themed line is a no-brainer. This version, based more on what a black widow spider actually looks like (the “hour glass” markings are on the bottom of such spiders, not the tops), seems to correct some of the mistakes of the Masterpiece figure.

While the engineering appears great on this, I would have liked to have seen a more golden color on the plastic. Perhaps this is one that will get a Walmart Netflix redo down the line? 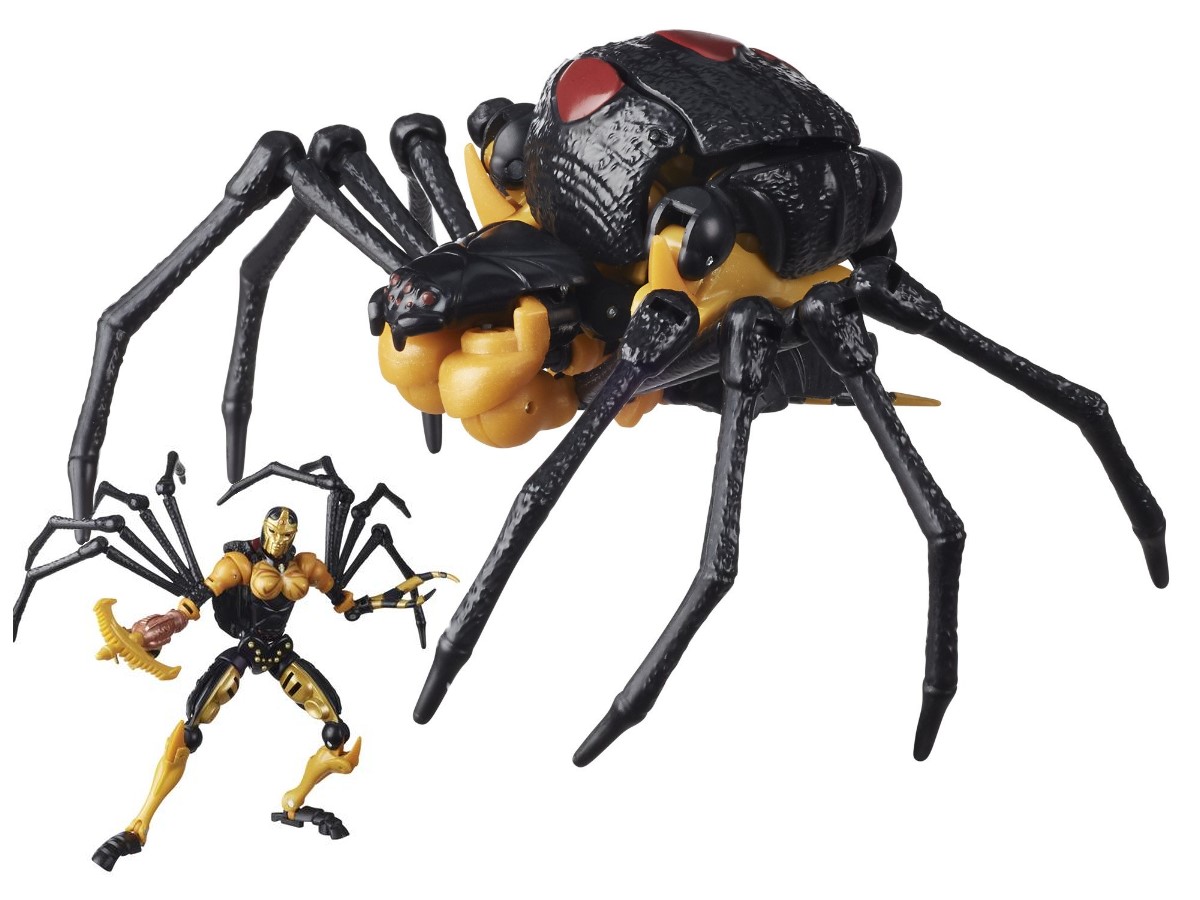 I’m not sure that we need another Warpath, as the 2011 Generations figure fills that void pretty well for me. But for those who would prefer a much more G1 looking tank, this one seems pretty good as well. The turret moves around nicely and the barrel goes up and down, which would seem to be basic qualities one would have in a tank mode, yet qualities one often finds lacking, so I am happy to see that this one has a “functional” tank alt-mode. 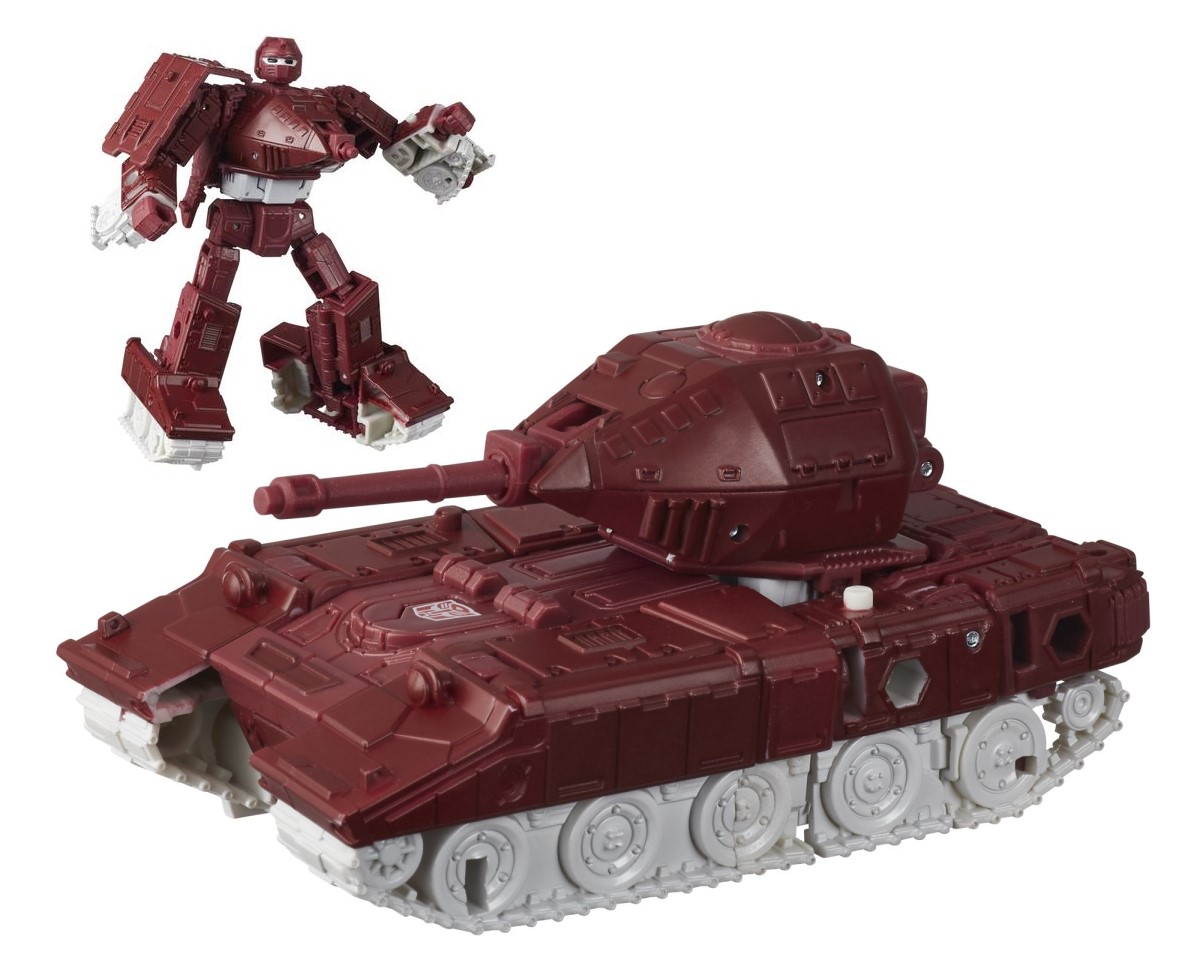 Perhaps the oddest of the bunch is the new character Paleotrex. Like Vertebreak, he is a new fossilizer character, transforming from robot to a Tyrannosaurus Rex skeleton. Unlike Vertebreak, however, Paleotrex is also a Weaponizer system robot like Cog or Six Gun from Siege that can break into bits of weapons and armor.

The deco on this guy is awesome, with the bones having a reddish tint in areas that reminds one of dried blood. The creepy face on this guy also has a battle mask like Beast Wars that resembles Optimus Primal’s mace… so you can use Paleotrex’s head as a spiked club. 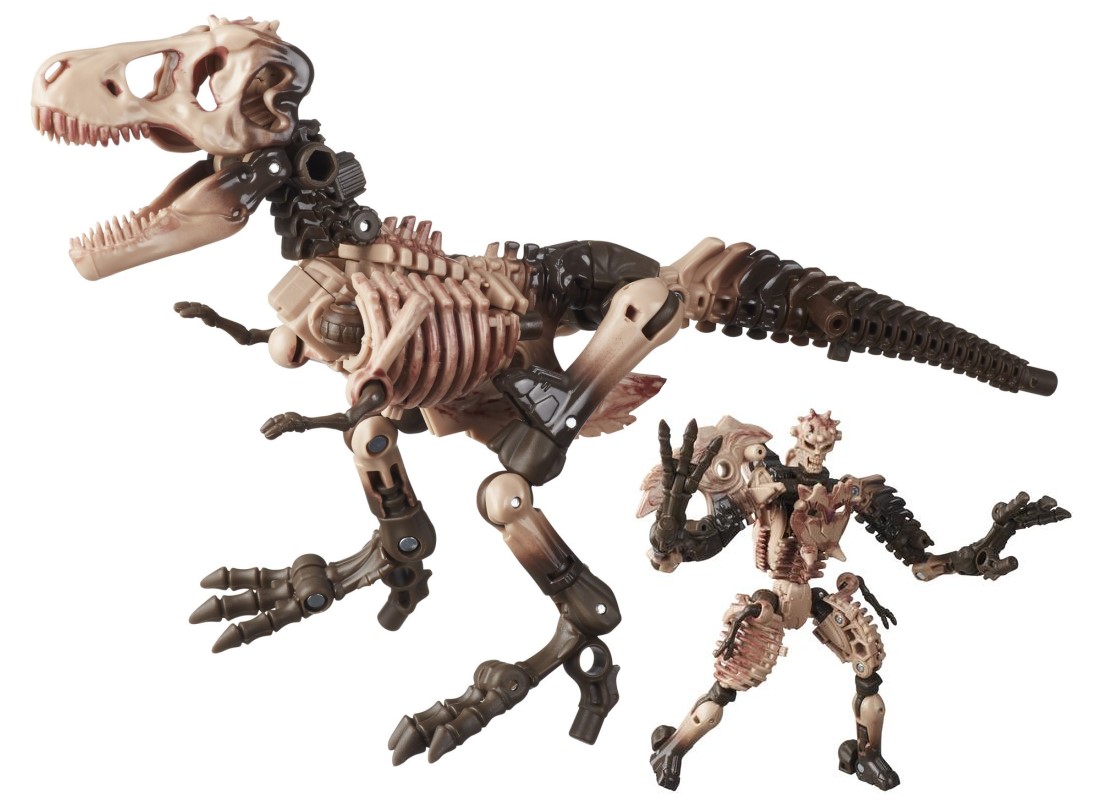 Two voyagers were also revealed for the first time officially for the Kingdom line in the last few days: Cyclonus and Optimus Primal.

While unpainted test shots of this new Cyclonus first appeared way back in early June, it has only been in the last week that we have seen official pics of the finished product. And he looks nice! Unlike the 2008 Universe figure that looked accurate but was too small, and the Combiner Wars figure that was the right size, but looked like Silverbolt in cosplay, this figure is the right size and the right look. The inclusion of his Targetmaster would have been a nice bonus, but I’m sure we will see many people reuse their old Nightstick from the previous Universe figure without too much issue. 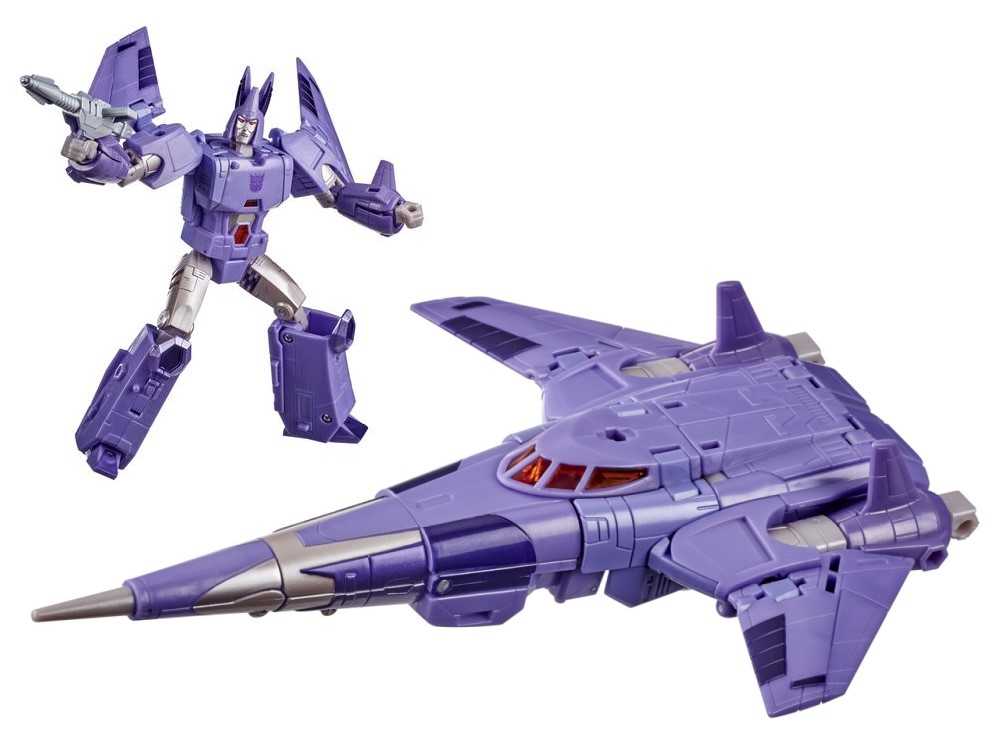 Fans voted for a new figure of Optimus Primal in the fan vote for the Power of the Primes line. That was before, however, the gimmick was revealed to be one of a younger leader “powering up” into a larger figure. Thus we got a figure that looked like Season 1 Beast Wars Optimus Primal… turning into a black slab meant to be a surfboard.

Don’t get me wrong, it was a nice update for the Optimal Optimus figure, but I don’t think it was exactly what fans were hoping for when they voted for a new Optimus Primal figure.

Kingdom Voyager Optimus Primal updates the beast mode nicely with fur texture sculpted in so that he looks like a true update to the character, rather than trying to make him look like outdated CGI from 1996. He retains many of the same feature of the original toy (swords that store on his back, guns that flip out to the sides of his neck, blasters in his arms, etc.) without having the gimmick chest pounding feature. His furry muffin top crotch is a bit awkward to see, but considering other NSFW alternatives, I’m fine with the choice. 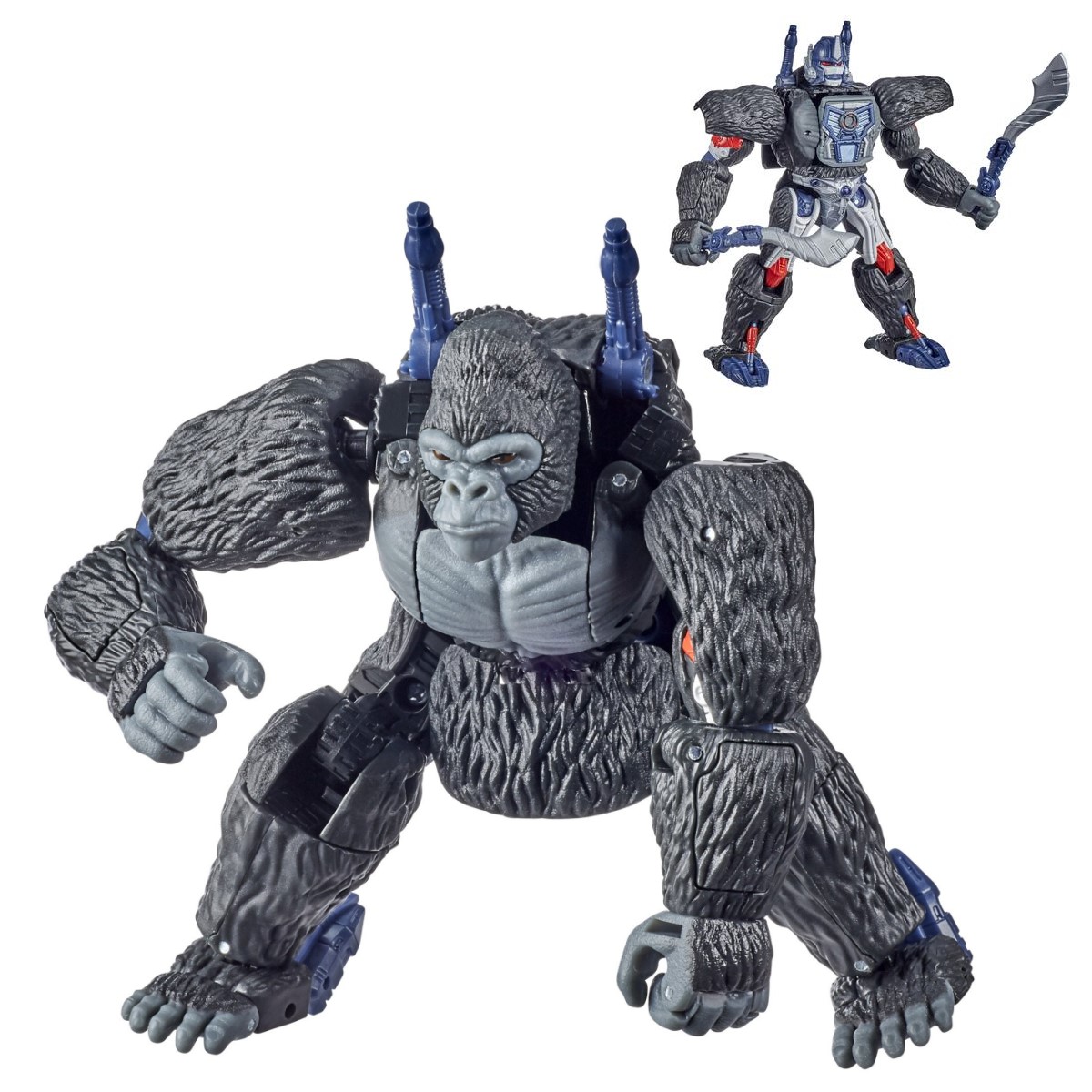 Robot mode wise, he looks just as impressive, and we can see that there is a hand underneath all that dinosaur tail. Hopefully that means that the arm can be freed up from the tail so that he’s not having to hold it as a weapon at all times.

I have already got my Botbot Quackles (the rubber duckie) ready and waiting to add him to my collection. 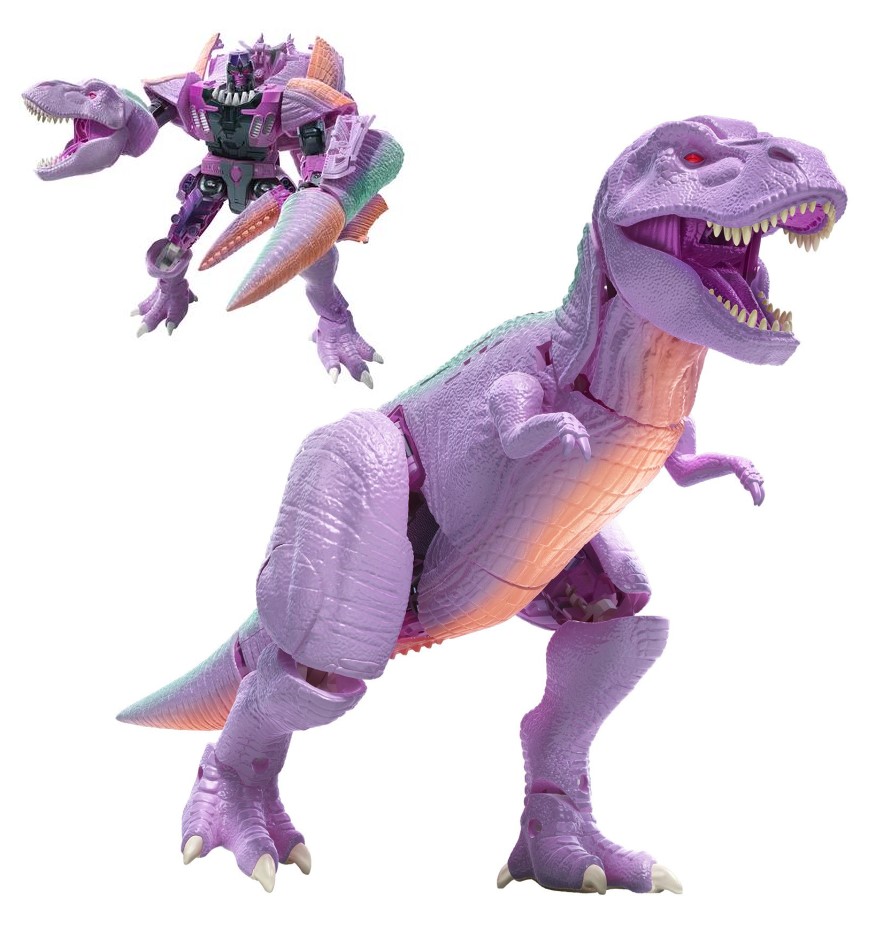