Although he’s been out for quite a while, at the time of writing Kingdom Roddy is still available from multiple places at varying price points. However, he’s generally on the more expensive side of the main-line figures so I thought I’d look at whether or not he justifies his high price tag. I’m going to discuss all of his plus points, a couple of frustrations and flaws, and even some positive sustainability features, so you can get a balanced view. 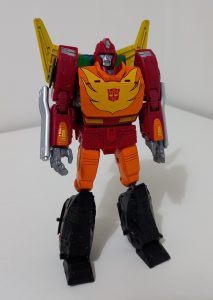 Rodimus Prime’s robot mode is his strongest mode in my opinion. Most adult Transformers collectors place a high value on screen accuracy when it comes to modern figures, so I wasn’t sure how I’d feel about the visible slots in the upper part of his chest that his alt mode windshield tab into. However, like many recent releases there’s something intangible about this figure that just feels better about him when you have him in-hand. This makes it easier to overlook subtle gripes like having visible slots in his chest.

Slots aside, he looks the part: an authentic representation of the Rodimus Prime we know from the ’86 movie and season 3 of The Transformers. His colors are bold and strong, and he’s well-articulated. His size, silhouette and head sculpt work together to make him look and feel like a leader. 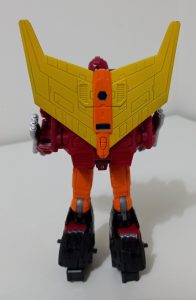 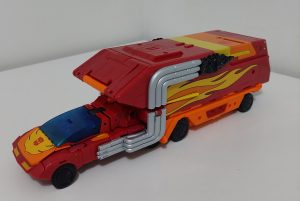 Ok, let’s get to the elephant in the room: the cab section of his space truck mode being far too long! Yes, it’s there but when you have him in hand it doesn’t look as bad as you’re expecting it to. From some angles it looks better or worse than others. A minor gripe that I have is his blue windshield not being the same shape as it was in the animation or in the G1 toy. This may seem like a small thing, but for me it was a visual aspect of the original toy/animation that stood out and carried over from his incarnation as Hot Rod. 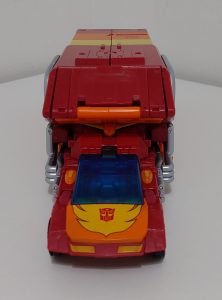 But, OH-MY! They have done a wonderful job of the paint work on his trailer section. This is flawless, with beautiful attention to detail and vibrant colors. While I believe his robot mode is his strongest mode, the paint job on his trailer is probably my favorite thing about the toy as a whole. 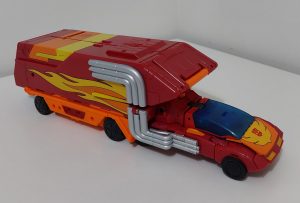 Before attaching the cab section to the trailer though, you also have the option of having Roddy in a Hot-Rod style car. This doesn’t have the sleek lines of the dedicated Hot Rod toys that we have, but it certainly looks and feels better than the G1 Rodimus toy which had a font cab with a long pair of legs hanging out the back of it. This is a nice touch and gives multiple play options for kids (big and small alike!) as well as giving another display option. 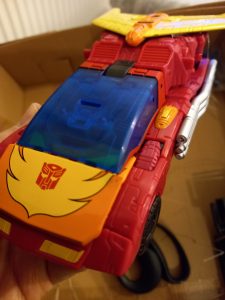 Transformation from vehicle mode to robot mode is very enjoyable. Yes, it’s complex, but it’s not bad for a modern Transformer of this size. In one step, you have to rotate his arms around, this is very reminiscent to me of some of the transformation scenes we see Hot Rod in during the movie. Folding his rear wheel sections into his legs can be a little unnerving. It works fine, but you really have to squeeze them in, and it makes me wonder how many times it will allow that before something breaks.

Transformation back to vehicle mode was a bit problematic for me though. When transforming him, you split his front wheels apart and push them up into his arm, securing into place by tabbing the outside of the wheel into the upper arm. This gives a really smooth finish and look and is reminiscent of his on-screen look.

However, one of my wheels just got completely stuck in his arm and it was a real struggle to prise it back out. I got there eventually, after taking a break from him and going back to him the following morning, but it was a painful experience! It also took me some time to click his cab into place into the trailer. He didn’t quite want to go all the way in, and I was very nervous about scratching paint off his spoiler. It took a lot of time and fiddling to get mine to line up nicely and click in, but it was very satisfying once it did! 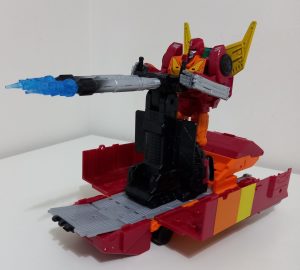 Loaded. Absolutely loaded! First, you have the G1 style opening of the trailer to reveal his mobile defense bay. This is really nicely done and homages the original very well. 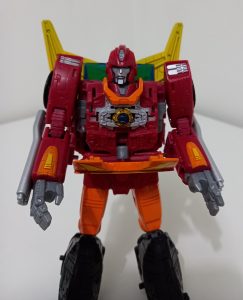 Theres’ a really nice Matrix of Leadership which can be stored in his chest, and his Photon Eliminator gun, which also folds up. He also comes with blast and smoke effects, and if that weren’t enough, there’s a drawer in his trailer for storage. Another addition is the sword he comes with, The Sword of Primus. It’s a cool sword and looks like something that a strong leader would wield. 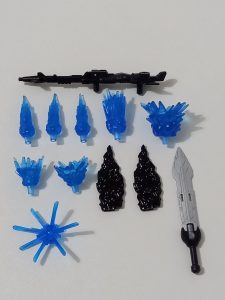 There’s a line of silver paint on the windshield on my model, and there’s something wrong with the paint on the upper outside of his chest/bonnet. It looks like the yellow has been mixed with something darker and this section looks cloudy or smokey. It isn’t picked up well on the photos but it’s visible to the naked eye. 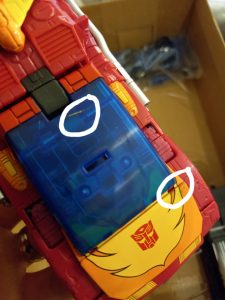 After transforming him only once, white stress marks appeared on the back of him. I’m very gentle and cautious during the transformation process, especially so with high price point figures. The last thing I want is something I’ve spent a lot of money on to break, so I’m slow, methodical, and gentle with everything. Nothing is ever forced so it’s disappointing to see stress marks appear on a toy at this price point after only one transformation. 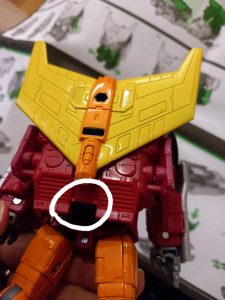 A Quick Note on Sustainability: 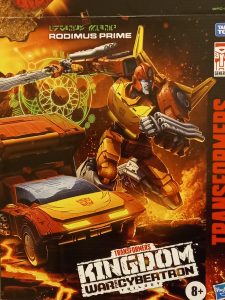 I love that this guy comes with such a minimal amount of plastic in his packaging. 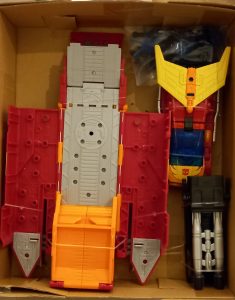 Lots of cardboard, no window, and the plastic bags that his accessories came in were all clearly marked with recycling logos. 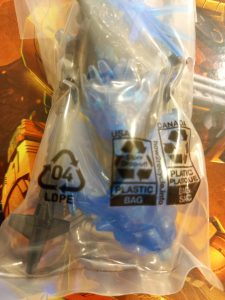 I love this step that Hasbro is making towards making their packaging more sustainable. Bravo.

I have really enjoyed this figure. He looks great, has a largely fun and interesting transformation, and is full of gimmicks. But I was lucky. I picked up mine in a sale for around £60. At this price point, I can overlook some of the paint errors and flaws, but that’s still being generous. If I’d paid full price for him, I’d be much less forgiving. I think when a long-time transformers fan is going to pay £90 of their hard-earned cash for a figure, it should be flawless. We deserve nothing less after all these years of loyalty. So, if you’re thinking of picking this guy up it’s important to consider these things and whether you think paint errors and stress marks are major or minor issues for the price you’re paying for him. 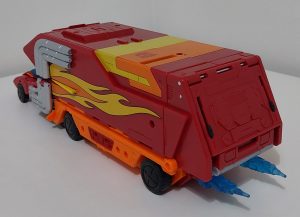