Sandstorm is a triple changer who can assume a dune-buggy mode or helicopter mode. He was first seen in the G1 Cartoon in the season 3 episode “Fight or Flee”. Let’s break down the various aspects of this figure: 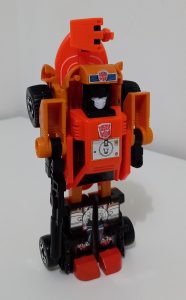 Sandstorm has a really nice-looking robot mode. His colors and stickers are really bright and bold without looking too garish. He has a nice face sculpt, although he has a mouth covering which isn’t present in his on-screen appearance, and his eyes are white rather than the blue color that they are on-screen. Other than that though, he’s not far off being very faithful to the animated version of him. Being a G1 toy, his articulation is minimal! You can move his arm at the elbow, his head swivels, and if we wanted to stretch it, he could point his toes if he wanted to! 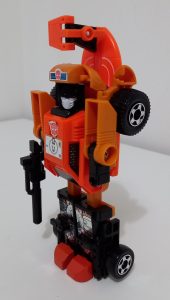 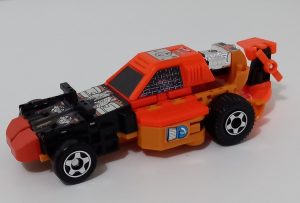 For me, Sandstorm’s dune buggy mode is his standout mode, but all three are good. He just looks sharp on his wheels from whatever angle you look at him. He rolls really nicely too. 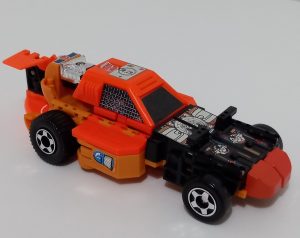 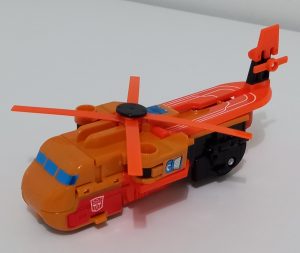 His helicopter mode is fantastic too. The way the red decals on the front are exposed by his transformation give him a completely look and feel from the dune buggy mode. 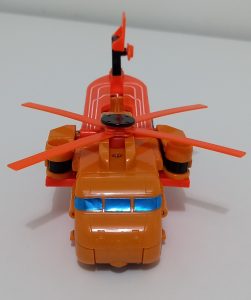 Sandstorm’s transformation is really nice, no frustrating or worrying steps. It’s an intelligent but also intuitive transformation. I feel if I gave him to someone who’d never handled him before, they’d be able to work out how to do it without worrying that they were going to break anything, and also be impressed by how cleverly designed he is. I particularly like how his chest and head/engine block slides down, and his rear wheels fold under to form the sides of the helicopter.

Not much to report here, other than the fact that he’s a triple changer (truly one of the best gimmicks!) and he comes with his gun, which is sculpted really well too with nice details and fits his hand really nicely.

A beautiful figure, intelligently designed and looks amazing in all three modes. The only thing that could make him any better is if his face was more screen accurate, but honestly, he’s so good and that’s such a small thing that it really doesn’t matter!