As you all know, everyone who has a full pass for Auto Assembly 2012 will receive one of our now-traditional “Goodie Bags”. We have been producing these giveaway packages of free gifts to all of our attendees since 2003 as a token of our appreciation for attendees to thank them for coming along to the convention. We have always believed that there is nothing worse than going along to any convention and going home empty handed. Whether you go along and don’t find any toys that grab your attention or not, or whether money is tight and you are struggling to afford anything, at least you will know that you’ll go home with something.

We firmly believe that by doing this, we can ensure that even if our attendees can only afford their travel costs and tickets, they will have something that they can get signed by our guests and will have something to take home to remember the day / weekend and we think that 2012 is our best ever goodie bag. We’ve been talking recently about some of the things we have been producing for this year, but now we can reveal all of them to you… 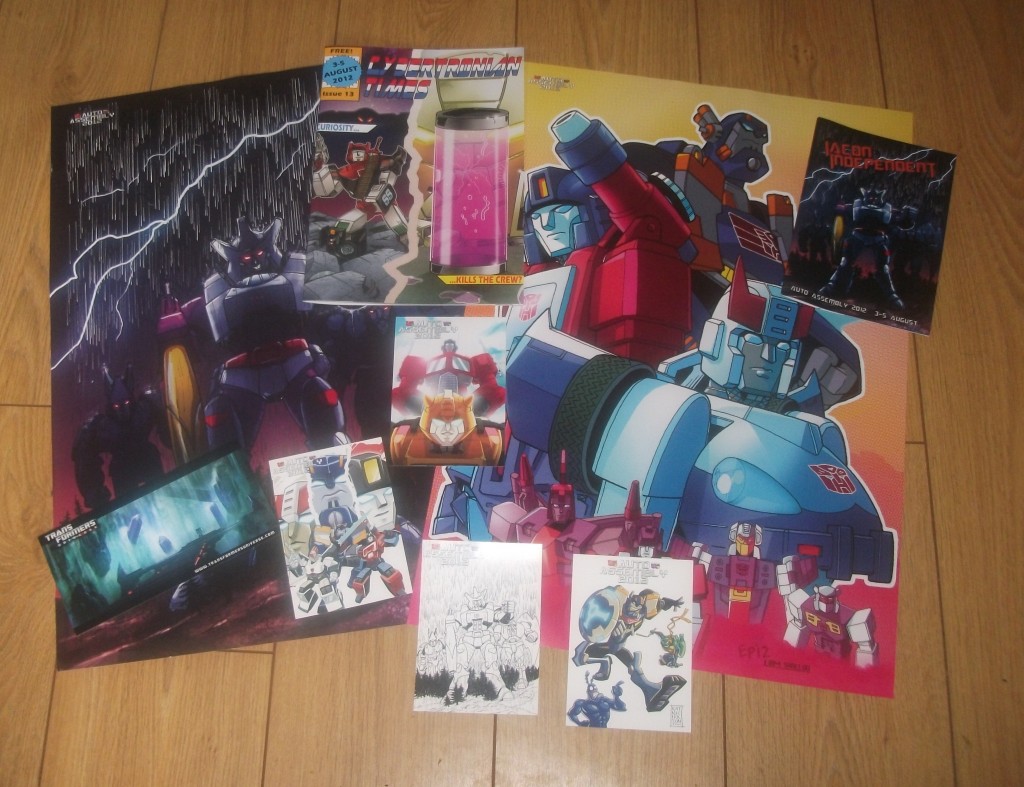 So what is there exactly? There are two A2 litho prints. One features G1 Galvatron and is a re-imagining of the final panel from the first chapter of the Marvel UK story Target 2006 and has been illustrated by Jeff Anderson with colours by Kris Carter. The second features characters played by our three guests of honour including Sentinel Prime, Prowl, Perceptor and many more and has been illustrated by our in-house artist Ed Pirrie with colours by Liam Shalloo.

Next we have our four latest postcards to our ongoing collection featuring artwork from Ed Pirrie, Kat Nicholson and Jeff Anderson plus an artcard from Jagex featuring concept art from their Transformers Universe game.

Moving away from artwork, we have two publications for everyone. First is the official convention magazine, The Cybertronian Times. This is our thirteenth issue this year, and it’s a full colour glossy A4 magazine with 40 pages packed with articles, features and comic strips as well as profiles on our guests. The we have a brand new title this year – Iacon Independent. This is our convention exclusive comic and is a 24 page A5 full colour comic full of original comic strips by a wide range of writers and artists. With stories covering G1, Beast Wars and Transformers Animated, there’s something here for everyone!

We do have a limited supply of extra bonus items and these are being inserted at random into the goodie bags that will be handed out at the convention but we’re not saying what they are and it could be anyone who will receive them! will be That’s not all though… if you have ordered our Non-Attendee Package, there are even MORE gifts including additional postcards and an audio CD! And you will also have an equal chance of getting these bonus random items that all our other attendees could end up getting so you could end up with as many as 17-20 items heading your way!

If you haven’t already booked up for the convention or ordered a Non-Attendee Pack, pre-registrations close in just SIX DAYS. After that time, you’ll still be able to come along and pay on the day but Non-Attendee Packs will no longer be available, and you won’t get a personalised pass if you want to attend the convention, nor will you be entered into any of our free prize draws (which are also open to Non-Attendees). If you’re not sure about attending or whether you can afford to come along and have enough money to cover your ticket, travel costs and have spending money left over if you can at least get your ticket and get to Birmingham, with this goodie bag you know you won’t go home empty handed and you’ll have something that you’ll be able to get signed by all our guests!

So what are you waiting for? There’s no better time to book your tickets while you can to be a part of Europe’s largest Transformers convention!