That’s right at long last Issue Zero of our new fanzine CT-Alpha from the creative team behind Auto Assembly’s convention magazine The Cybertronian Times, is available as promised this issue is entirely free of charge.  32 pages for the cost of your time.

So what do you get in Issue Zero I hear you ask?  Well kicking off the magazine we have a six page prologue to the ongoing comic story that will be in CT-Alpha – Transformers: Animated Season Four.  Nothing ever stays dead in the Transformers universe, and it’s never as simple as waving a magic wand and coming back in this tale courtesy of myself and Ralph Burns.

Other comic strips include – The Story of Drift – Matt Marshall crafts a delightfully skewed look at the most divisive Transformers character in recent years.  Life Goes On – Sam Palmer shows us that while many did lose their lives in the events shown in Last Stand of the Wreckers it is not the end of Impactor’s story.  Inheritance from Fox and Jasmine Smith and Malmunis show us an Optimus Prime reflecting back on the life of another. Rounding out the comic content is the delightfully off-kilter Tales From Esoteria by Gav Spence.  He dreams about Transformers and draws it for you!

Fans of good quality text stories we have plenty of good things for you to: A Rock and a Hard Place by Aimee Morgan – Kup’s Cygar is the only thing holding him back from falling into the madness that beset him before (Spotlight: Kup), but is it the best possible solution to his problem?  Verity Carlo doesn’t seem to think so.  Predatory Instinct sees us look at the legendary hunters of the Great War – The Predacons.  Some legends fade into memory, while others live again as we will see in this tale by Nick Snowden.  Robert Lock gives us Just because you are Paranoid:  A life in the day of Venom – as the new Decepticon head of security conducts interviews for his assistance.   He needs the right sort of personality for the role and he’s going to be thorough!    For Survival – David Underwood takes us into the mindscape of Sentinel Prime.  Just why did the one-time leader of the Autobots find himself allied with Megatron?   Finally – Revenge of a Medic by Nicola Piazza.  Ratchet spends far too much of his time patching up Sunstreaker and Sideswipe over the years with their excesses.  Today he gets one back on them.

All wrapped up in a beautiful cover by Guido Guidi (which eagle eyed readers will recognise as the basis for Cybertronian Times Issue 11 in 2010).  This time in it’s pristine monochrome glory.Well that’s your lot for now.

You want more?  Well okay then, but you’ll need to wait.  Check back in two month’s time we will have CT-Alpha Issue 1 waiting for you. 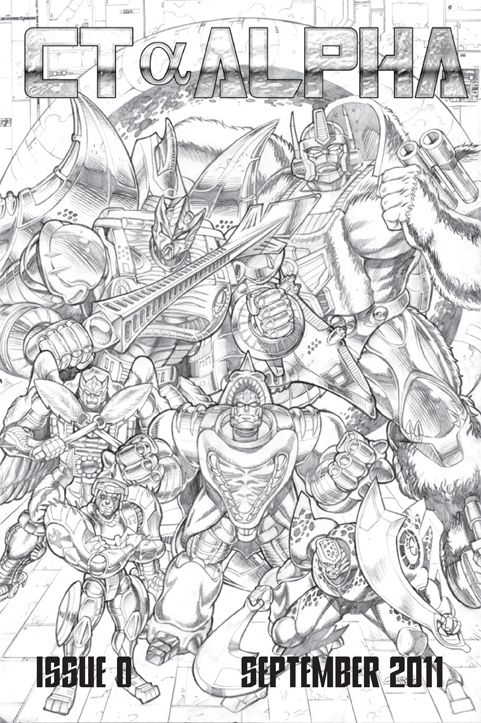