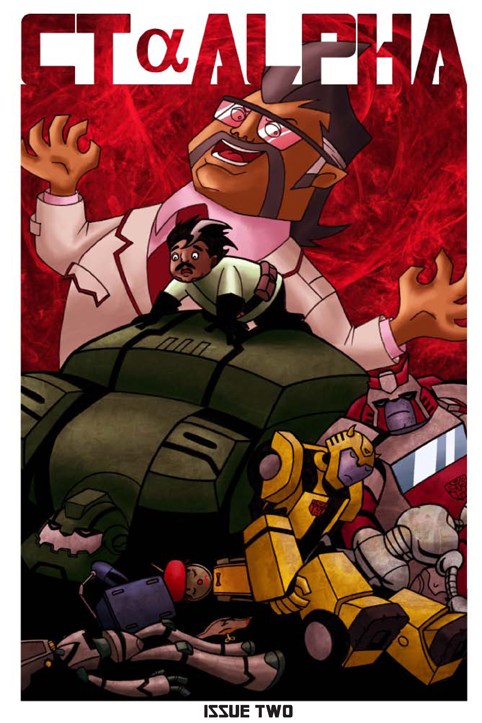 This issue contains 36 pages with the following:

IS THIS PLANET INHIBITED? PART TWO OF TWO- eleven pages of comic strip action set in the Transformers: Animated universe by Burns/Turnbull/Marshall.

We left Ratchet frozen in place by a a Porter C Powell modified Inhibitor Claw he’s obtained from…somewhere. Isaac Sumdac is trapped in Powell’s building without help from his Autobot ally – how can he get out of this?

THE SENTINEL FILES – a peek into the confidential files of the current acting Magnus: Written by Matt Marshall, art by Alies Meerman and Gavin Spence.

THREELAUNCH – IDW Publishing’s grand relaunch of their Transformers comic line gets some attention as we turn an eye to the first issues of More Than Meets The Eye, Robots in Disguise and Transformers: Autocracy.

RESCUE ME – a new Transformers cartoon aimed explicitly at a younger audience – Rescue Bots debuted this year and Karl Thurgood takes a look at the opening two episodes.

TRANS-FORGOTTEN – Chris McFeely of TF WIKI and metrodome audio-commentary fame hops aboard CT-Alpha and casts some light on some less well known areas of Transformers fiction.