I see myself as something of an anomaly among  Transformers fans. I grew up with G1 and I like the Michael  Bay movies. What?! You heard me.

For what they are, I find them quite entertaining. That’s not to say I don’t recognise some of the huge issues that the movies have. No movies perfect. That’s just a fact of life. There’s always room for improvement and with this film series in particular. One of the many gripes people have with these films, is the way some characters are written or performed. For this list, I wanted to call out the most irritating characters in the Michael Bay Transformers movie-verse. Before I start, I want to be clear on a few things. This is my opinion. I do however, openly welcome discussion on the subject.

The other thing I want to be clear on is that this is in no way an attack on the actors in the roles. Whatever the reason for character being irritating, it all comes down to a series of choices made by the film-makers leading up to that performance. The last thing I want to do is unfairly bash a performer since I’ve seen most of them give solid performances elsewhere.

So, in no particular order, here are the most irritating movie-verse characters. 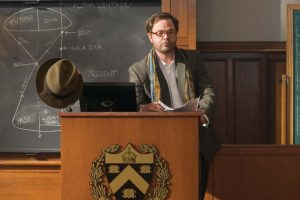 Rainn Wilson is a fantastic comedic actor. Sitting though every episode of the US version of ‘The Office’ showed me that. Why, then, is he wasted in this role? This is irritating for two reasons. One is the aforementioned waste of a good actor in an unnecessary cameo role. The other is that, like a lot of Bay’s characters, he’s a sleazy version of what Michael Bay thinks a college lecturer is. He’s arrogant, condescending and is flirting like he’s The Fonz, while the Dean of the college sat right there watching him. It’s just so cringe-worthy when he takes a bit of the apple and then tells a female student to finish it for him. Oh dear. 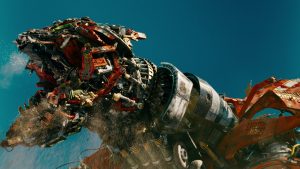 Anyone who knows how Devastator should look will know why this character is irritating. Because that’s not Devastator!! Now, I’m open to new interpretations of characters. Sometimes a new design can revitalise a stagnant character and give him new life. But the character at least needs to be recogniseable. What they did here was take the iconic Constructicons and have them combine to form King Kong essentially. What the hell? He look and moved like a gorilla, he had a blow dryer for a mouth , and worst of all, a scrotum. Why was that necessary? For a joke? So Simmons can give his location as below the enemies scrotum? A lame joke for a lame version of this beloved character.

The weirdest part was that while Devastator was scaling the pyramid, the robots that combined to form him were fighting elsewhere. That makes no sense unless they have doubles. 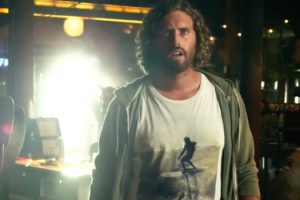 Ah, Lucas. A character created solely to shoehorn TJ Miller into an already bloated movie. I’ve not seen TJ Miller in very much but I thought he was ok in Deadpool. But here, he’s just grating and it’s the way his character comes across. He has weird, sleazy vibe to him that a lot of the characters in this series seem to have. Seriously, listen to some of the weird things these characters say. Lucas annoys Wahlberg’s character, Cade, by commenting on the short shorts that Cade’s high school daughter wears. To make matters worse, he then sells out his friend by reporting the location of Optimus Prime to a government agency. Thankfully, Bay saw the error of his ways and had Lockdown turn Lucas into stone or something. I honestly thought I was going to have to put up with him for the whole movie. 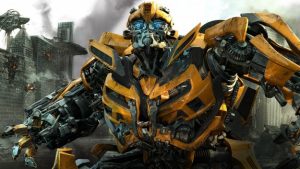 I love Bumblebee. I do. But the movies seem to revolve around him like he’s the main character. Back in the day, there were two or three Bumblebee toys. Now they’re everywhere! For the most part, they’re great toys but every single wave seems to have a new Bumblebee in it thanks to the way the movie series have popularised him. He’s the Wolverine of Transformers. He even leads his own team now. And why can’t he talk in the movies?? Ratchet clearly fixed him at the end of the first one. If I’d fixed someone and they didn’t make the most of it, I’d take that as an insult.

Why, oh why did this happen? I’m not even sure who or what this character is. I’ve heard him referred to as Wheeljack. He refers to himself as Que. If he is supposed to be Wheeljack, then he’s a massive fail. They took an iconic, unique design and made him look like the Professor from a Wheeto’s box. Why does he even look like that anyway? As far as I can tell in the movie-lore, Cybertronians retain their facial features no matter what mode they take. So why does he look like a stereotypical Earth professor complete with glasses. Makes no sense and looks daft. 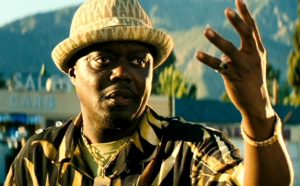 The late Bernie Mac was awesome when he was cast in the right role. He was great in almost everything he did. His appearance in the Transformers franchise as the used car salesman who sells Bumblebee to Sam sadly was such a waste. It’s much like Rainn Wilsons turn as the college professor. It’s literally just a cameo so that audiences can go “Hey, it’s Bernie Mac”. Which is, by the way, exactly what I did when I saw it. That and the joke about having the runs just makes him an odd character and it baffles me how he ever sold a car. 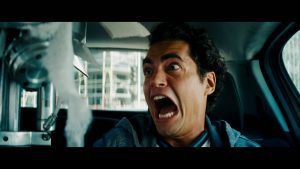 Leo Sucks is more like it. One of the most pointless characters in the whole franchise. This character literally brings nothing to the plot. I can’t think of a single thing he does other than distracting the guard during the museum scene. Any one of the other characters could’ve done that. Otherwise, he spends the movie screaming. I understand that they needed to show Sam going to college, meeting new people and struggling to acclimatise but why did Leo have to join him for the rest of the movie? Just drop him off at home before heading to Jordan. Also he had that weird sleazy streak I mentioned earlier. A fair percentage of his screen time is spent making uncomfortable and unwelcome advances toward female characters. 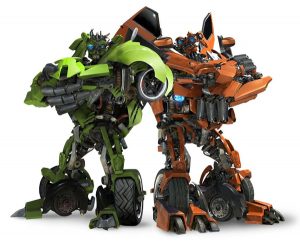 These guys are being listed together because I can never tell them apart. They have become the Jar Jar Binks of the Transformers franchise. Skids and Mudflap were introduced into Revenge Of The Fallen as comic relief characters. They fell flat for numerous reasons. One of which is that they seem to be racial caricatures. The way they speak, look and act shows that Bay has lost all ability to be subtle in his depictions of certain stereotypes. It’s a damn shame too because despite how awful these characters were, Hasbro turned out some pretty impressive toy versions of them.

Question for our readers. How do you make people nostalgic for G1 Wheelie? Make him even more irritating in the movie franchise. What the hell were they thinking here? In the G1 series, Wheelie was a little annoying but he was childlike. He had a playful attitude and talked in rhymes. Now he’s weird little sex pest who talks like Joe Pesci in Goodfellas. He humps Megan Fox’s leg! Why would an aliend robot from a distant planet be humping someone’s leg? That’s not how Cybertronians procreate. On the flip side, I thought his alt-mode of an RC Truck was ingenious for a scout character and it resulted in yet another great toy from Hasbro. Seriously, ROTF was like a gold-mine for awesome toys from Hasbro. 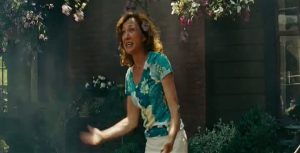 Now onto the real villain of these movies. Only kidding. But seriously, who’s decision was it to make Sam’s mum completely insane. In the first movie, she’s tolerable. Ok she’s a little over-bearing and embarrassing for Sam. Then by the next movie, she’s a total nutter. Her moods seem to be completely erratic and unstable, she takes drugs and seems to indicate that she may have been fairly promiscuous in her early days. There’s no way she’s naïve enough to not realise she’s eating pot brownies. Also, they took effect immediately. I’m no expert but I’m pretty sure they take more than a minute to affect a person. It makes me think that Judy Witwicky wanted to unleash the crazy and used the brownies as an excuse for her terrible behaviour. I have become convinced that she is Galvatron in a Pretender Shell posing as Sam’s mum. It’s the only thing that explains her crazy behaviour.

So that’s my list. You may not agree with all of them but if most of these characters were written as more than one-dimensional caricatures, I think the movies would come across a lot better. Now that I’ve got that out of my system, my next list can be a lot more positive.

Disagree? Let us know in the comments below.