Once again we’re pleased to be able to confirm yet another returning comic guest for this year’s convention and someone who made a huge impact on attendees when he made his debut at the Auto Assembly just a couple of years ago back in 2012. Yes, we’re talking about the return of IDW artist Livio Ramondelli who will be on hand throughout the convention to talk about his work at IDW, to take part in Q&A Panels with our other comic guests and meet fans throughout the weekend… 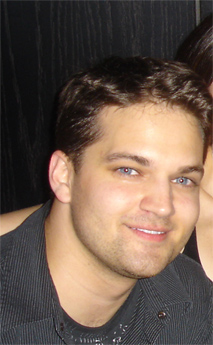 Livio has been responsible for the stunning painted artwork that has been seen on IDW’s groundbreaking digital series Autocracy and it’s follow-up Monstrosity written by animated movie writer Flint Dille. His unique artistic style has won him a legion of fans quickly making him a firm fan favourite.

In addition to these series, his other IDW Transformers credits have included Chaos, The Best of Optimus Prime / Best of Megatron trade paperback covers, as well as covers for IDW’s Infestation II event series. He previously worked for WildStorm Productions, doing design work for the DC Universe Online game… and as he admits himself he also really loves movies!

As with all our confirmed guests for the convention so far, Livio will be with us all weekend and along with the majority of our comic guests Livio will be sketching for attendees for most of the weekend.