I’m so glad I picked up this figure-he’s so much fun! I initially was skeptical, and having the original G1 Kup in my collection, I wasn’t sure how much more this figure would bring to the table. How wrong I was! 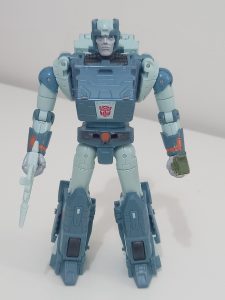 Pictures and videos don’t do this guy justice (perhaps it’s a “mockery of justice!”). In hand he feels like the real deal. Lean and not chunky like other Kup figures have been, it’s amazing how all of his alt mode pieces compress and hide to create a slimline Kup figure that really does accurately represent his appearance in the ‘86 movie. 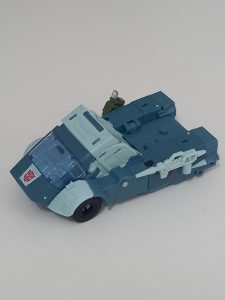 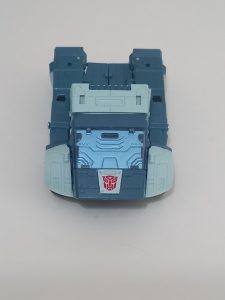 Argh those wheel pegs! Kup’s alt mode is nice, it’s very accurate to what we’d expect to see. Much Like the Jazz figure from this line, I find it hard to see how an MP release, if there was to ever be one, could top this figure. If they fixed those wheel pegs for something nicer looking he’d be as perfect as you could get him, and again he appears much nicer in hand than I expected him to.

Kup’s transformation is perhaps more intricate than some of the other Studio Series 86 figures. He has a clever joint as part of his shoulder, which ultimately allows you to tuck his arms out of the way in alt mode. This joint is VERY tight and requires a considerable amount of pressure to get it to move (only when going from robot to car, it’s easy when converting back). This creates a bit of a nerve wracking feeling as you try to get it to move without breaking his arm off! Everything else moves nicely and smoothly, and it’s fantastic how much his overall shape changes from robot mode to alt mode. When converting back, I had a bit of trouble getting his fists to let go of the tab that holds his alt mode storage compartment in place. 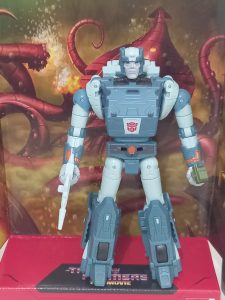 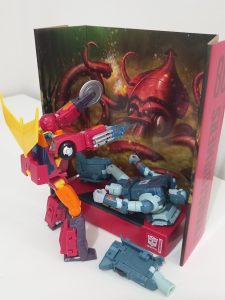 The giant robot squid backdrop that comes with Kup is very well detailed. The depths of Unicron backdrop that comes with Hot Rod is slightly bigger than the backdrops that come with the other figures, meaning it’s a little too big for the shelf I had reserved for these guys in my display cabinet. However, as Hot Rod was instrumental in rescuing Kup from the squid, I’ve been able to display this backdrop, with both figures. I can’t tell you how much my inner-child beamed when I saw both figures displayed with this scene!

Kup also comes with his gun – which is very screen accurate, and his energon-goodie dispenser! Both of Kup’s accesories can be stored on his vehicle mode as per the above vehicle mode picture. Another feature, is that Kup’s arms and legs allow you to simulate the damage inflicted on him by the giant squid, which Hot Rod would ultimately fix for him.

This figure really is more than meets the eye. I was surprised how enjoyable I found him, and how great he looks in hand. I highly recommend him, but just advise taking your time over the transformation.

About Steve Shreeve 35 Articles
Steve Shreeve is a busy Personal Trainer who loves to write. As well as his love for health and fitness, Steve has many interests including Transformers, Star Trek, basketball, conservation of plants and animals and is a keen supporter of The Shark Trust and The Woodland Trust.