Gaming has always been my first love, right since the 1970s and despite the high-street presence of the toys and comics and daily serialised screening of the G1 cartoon, I tried to avoid Transformers first time around. However, as someone who was passionate about gaming on the Commodore 64, I was eager to own as many games as possible for the classic 8-bit system so buying the Transformers game from Ocean software when it was released in 1985 was no exception.

Released simultaneously for the Commodore 64 and ZX Spectrum, it was released at a time when Ocean software had already built up a strong reputation for some technically impressive games on most systems they were working on and they had a track record for delivering some great arcade conversions (through their Imagine label). When the G1 toys were in their prime (sorry!), Ocean turned to experienced developers Denton Designs to produce this platform adventure game for them.

As with most full priced games at the time, the C64 version was slightly more expensive than the Spectrum one although it did ship in the larger plastic “clamshell” case instead of a single cassette case. Hardly enough to warrant the higher price but many companies adopted this pricing policy with Commodore 64 games back then, assuming that C64 owners were happier paying more for their games as their computer cost more. Eventually the same approach to pricing took hold for the Atari ST / Amiga (but that’s another story altogether)… 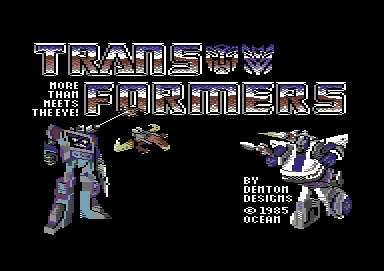 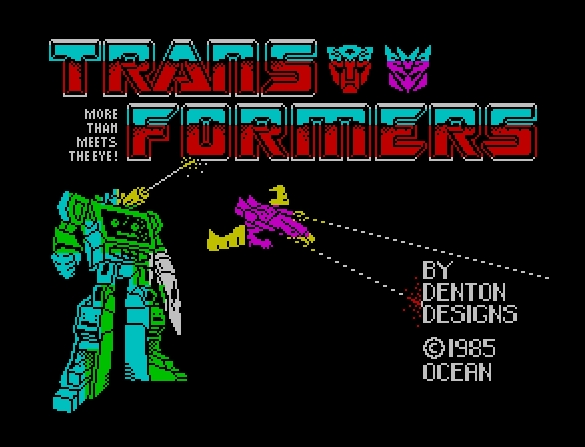 The game loaded up with an impressive title screen (okay, well it was at the time!), revealing gradually while a great piece of music played by Martin Galway on the Commodore 64. The Spectrum version had a similar version of the title screen, with just the absence of Jazz being the obvious difference and the more obvious limitations in the Spectrum’s colour palette. Back to the sound, and while Galway handled the title music for the C64 version, the in-game music was created by Denton Designs’ regular Fred Gray while the Spectrum version was limited to sound effects throughout.

Onto the game itself, and Transformers is a relatively simplistic affair. The game is a side-on platform shoot-em-up, and you’re in charge of a team of five Autobots (Optimus Prime, Jazz, Bumblebee, Hound and Mirage) and you have to explore the game’s terrain to find four lost pieces of the Autobot Energon Cube (hey, I didn’t make this up!). Once found, you have to return them one-by-one to the Autobot Centre (a box in the centre of the play area) and once you’ve found all four you’ve completed the game.

It’s not as simple as it sounds though. There’s a maze of platforms to navigate, and a never-ending onslaught from the Decepticons that you have to deal with, who are determined to stop you and take the Cube fragments for themselves. Why they want the cube (and why you are trying to find it for that matter) is anyone’s guess!

Each of your Autobots has three modes of transport – walking, flight (don’t get me started on this one continuity buffs!), or vehicle mode. Different modes are best used to negotiate different parts of the levels with some platforms only being accessible through flight. Naturally, driving around is one of the quickest ways to explore the levels, but it is all too easy to drive too fast and end up going over the edge off a platform. You are open to attack in vehicle mode, but can shoot back in robot or flight mode, and different modes of transport offer different benefits and levels of control for manoeuvring around the levels themselves so there is a degree of strategy to the game with the use of the different forms.

Each of the Autobots on offer have different advantages and disadvantages to the player. It is possible to switch between ‘bots at any time during the game as long as you move into one of a number of pods scattered around the playing area. Naturally, Optimus Prime is the best for firepower and damage resistance, but he is rather cumbersome when it comes to negotiating some of the trickier platforms. By the same token, Bumblebee isn’t one to use if you are expecting heavy combat, but because of his size, he can get into tighter places if you’re not too confident about getting the bulkier Autobots through to the fragments. However, Jazz would appear to be the best all-rounder. 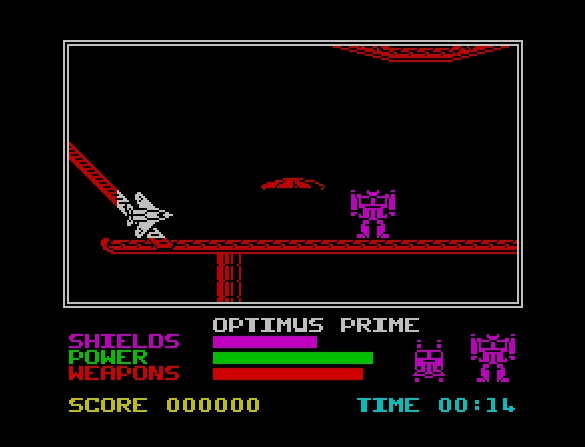 The graphics in the game are something of a mixed bag. The sprites are well drawn and well-animated, especially the transformation sequences, but the background images are appalling. The platforms consist of little more than metallic pipes on a plain black background. Yes, the game scrolls smoothly enough on the Commodore 64, but when the screen doesn’t even look interesting, the gameplay has to exceptional to make you come back for that elusive “one more go”.

The Spectrum version differs here. The platforms lose the metallic look, but instead to try to minimise the expected colour clash all of the Autobots are colour matched to their toy counterparts making them relatively easy to identify and the platforms – while monochromatic – alter their colour depending on the Autobot you use so the display is never confusing. However, the game takes a flick-screen approach so it makes it difficult to see what lies ahead.

Special mention has to go to the C64 music by Fred Gray. He has managed to produce a faithful renditioning of the Transformers theme for the game, although there isn’t a great deal of music during the game itself. However, the sound effects are rather sparse and what is there is limited considering the C64s capabilities and the Spectrum doesn’t fare any better.

Aesthetics aside, the game’s biggest weakness comes through – irrespective of the format – once you start to actually play it. The controls are unresponsive at best and feel extremely sluggish. Granted, you are supposed to be in control of giant 20+ foot tall robots, but regardless of whether they are on foot, on four wheels or in the air, you’d still expect them to be able to move and react more rapidly than they do and you often feel that you end up pushing the joystick in a particular direction and hoping for the best. As much as it pains me to say it, the Spectrum version seemed to run considerably slower than the C64 version to the extent that in-air control was excrutiatingly frustrating.

The controls added to what was already a difficult game. Precision controls are needed to not only navigate but to land on platforms to rescue the lost cube pieces. If you don’t position your Autobots in exactly the right way when trying to land, you’ll crash and lose that bot for good and the collision detection that seems to be hit-and-miss sometimes doesn’t make life any easier. The final frustration is the system used for selecting characters. In the 80s, developer Denton Designs were famous for their icon-based adventure games, but why on Earth did they decide to use an icon based character selection system here? You’re not in any danger while choosing your characters, but it felt like they were over-complicating things just because they could. 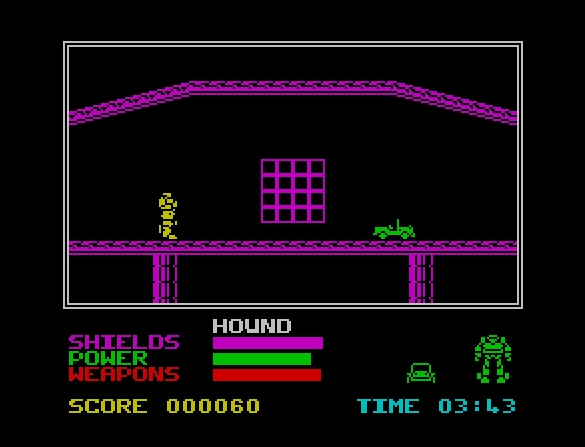 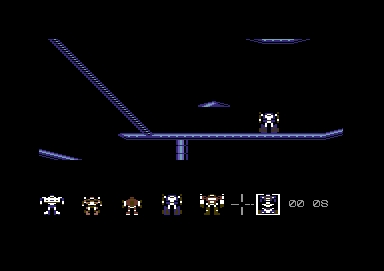 The reality is that this game was a critical flop when it was first released over 30 years ago and time certainly hasn’t been kind to it. Despite it’s aggressive difficulty, the game’s brevity is all too apparent. Expert players have been known to complete the game from start to finish in just a couple of minutes and after that point there’s no fanfare, no real celebration to speak of – the game just loops and you have to complete it all over again not that you’re likely to have the urge to do so.

For Transformers fans then yes, it’s something that you’re likely to want to own in your collection for its historical significance as the first Transformers video game produced. For Spectrum owners, sadly this is the only game to have been released and it has to be said that the machine deserved much better. Even back then, both computers were capable of much more both technically and in terms of gameplay and Ocean Software should have known better.

The Spectrum version of this game was reviewed using a ZX Spectrum Vega, supplied by Retro Computers Ltd. For further information on this retro console, read our full review on the Infinite Frontiers website at:- http://www.infinitefrontiers.org.uk/2016/04/06/console-review-sinclair-zx-spectrum-vega/