As part of our charity fundraising for Auto Assembly over the years, in addition to our Charity Auctions we have run a Charity Raffle that has taken place throughout the convention weekend. However this hasn’t always worked as smoothly as we would have liked and while these have managed to raise a considerable sum of money for charity in addition to the sums raised by the auctions, they have caused problems…

Because of the number of tickets sold over the weekend and number of prizes we have had, it has meant that we have had to hold a number of draws and scheduling these has proved to be extremely difficult. If the programme has over-run for any reason, it has meant that attendees have missed prize draws and for those only joining us for a single day they have missed several draws completely. So for Auto Assembly 2013 we are changing things completely and bringing you…

Starting this year we are swapping over to a completely new system which will not only be a lot fairer for everyone but we think a lot more fun as well (and afterall, isn’t that what Auto Assembly is all about?!!). We are proud to be able to announce that we are running a new tombola  this year from the Control Desk all weekend. Here you will be able to buy tickets at any point during the weekend for 50p each and – as with any tombola that you may have seen at a local fete or school fair – pick tickets out at random from a drum or box. If any of the tickets you have picked out end in a 0 (zero) then you have won a prize! All you will need to do is check the number against the number on the prize on the desk to see what you’ve won!

So what’s on offer? Well, we’re adding prizes to our massive selection every day but so far we have an incredible collection of almost 80 items including toys, autographs, comics… something for all ages as you can see from the photos here: 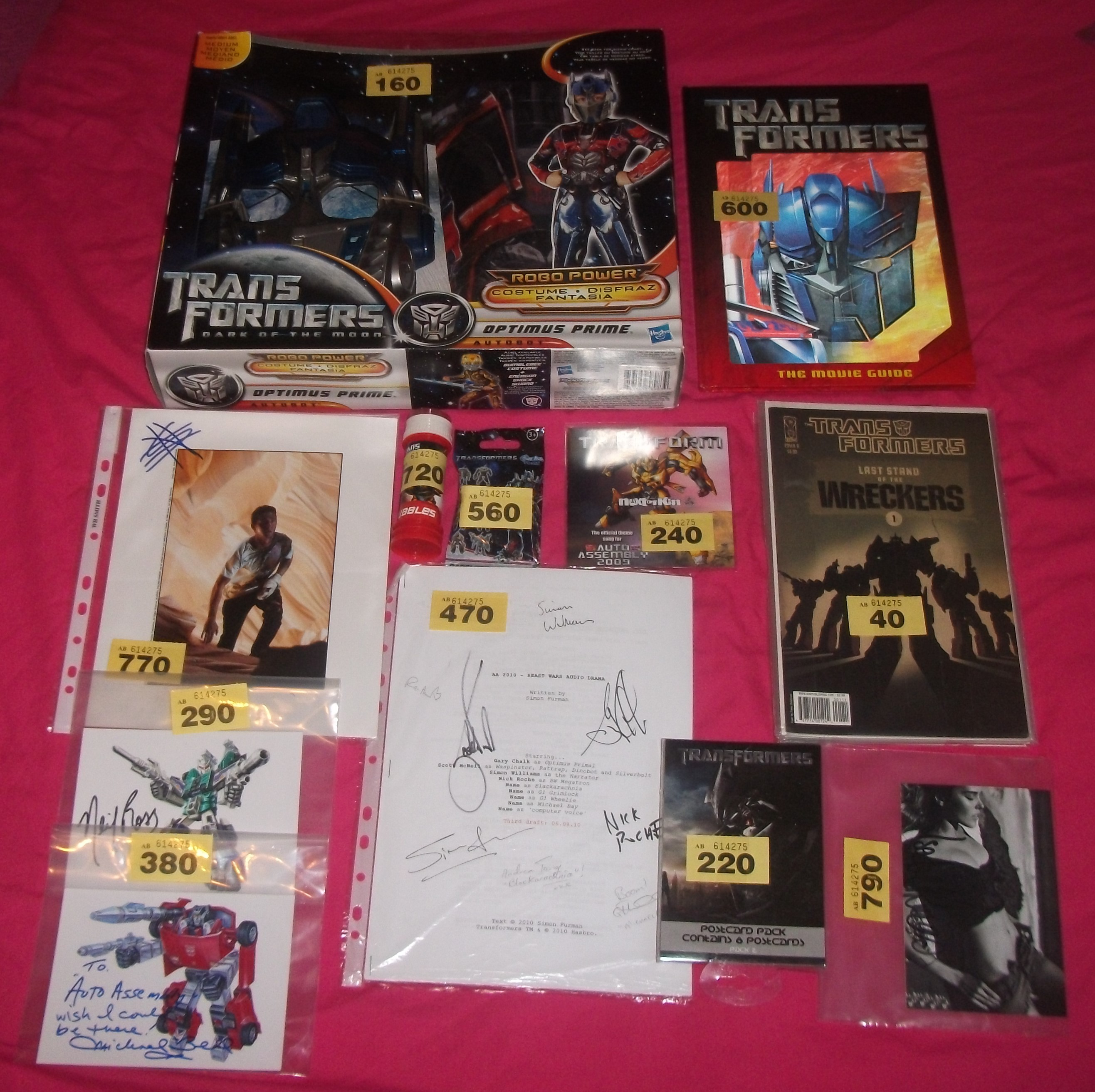 In this photo alone are autographs from Shia La Beouf, Michael Bell, a full set of Last Stand Of The Wreckers and the script (signed by all the cast including Scott McNeil and Garry Chalk) for the Auto Assembly 2010 Script Reading! Not enough? What about these… 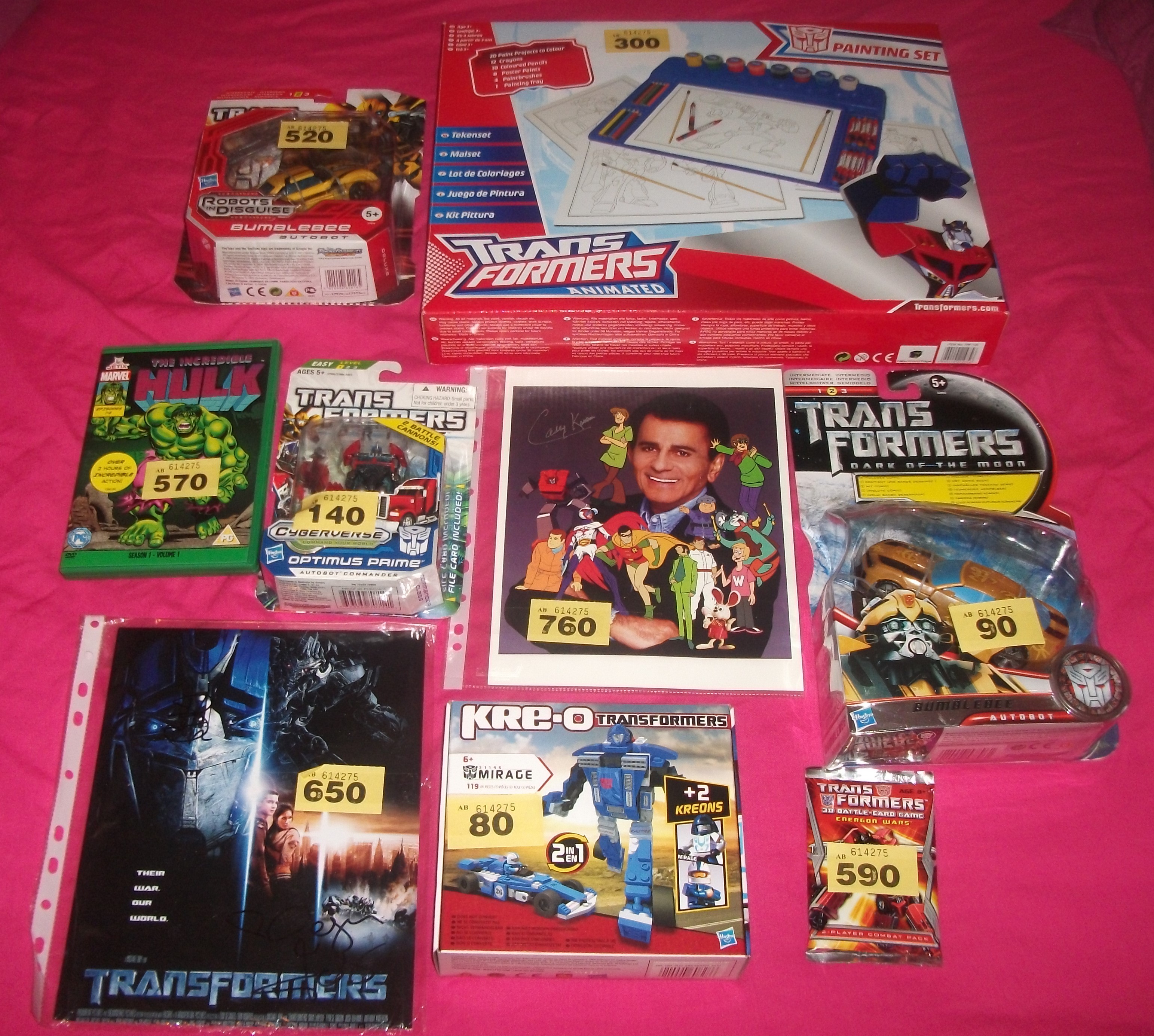 Signed photo from Casey Kasem anyone? Kre-o Mrage, Transformers Prime toys or autographs from Shia La Beouf and Megan Fox… Nope? Why not try these ones: 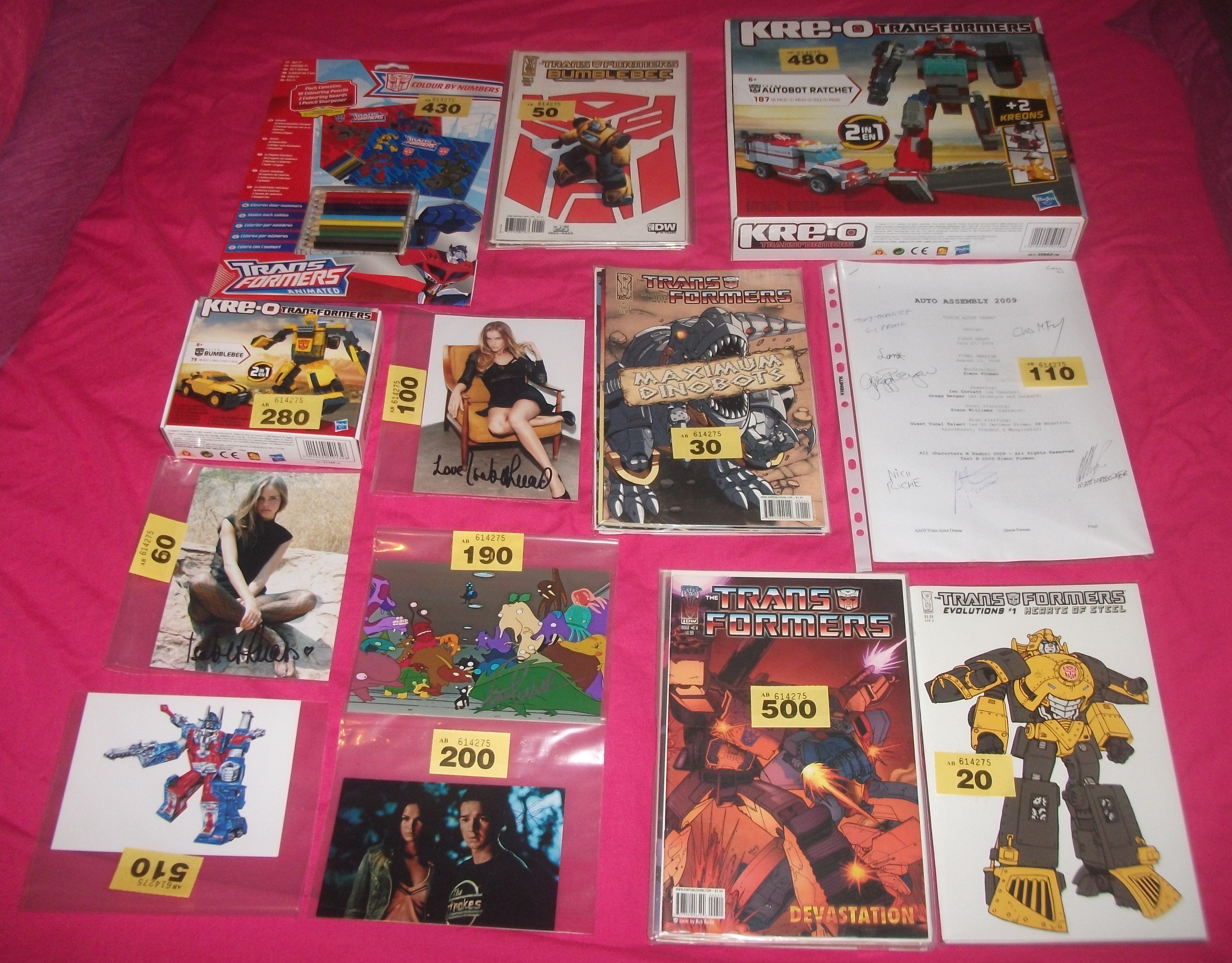 You want more autographs? How about Frank Welker and Jack Angel! Comics? Complete sets for Maximum Dinobots, Devastation and more. More Kre-o sets and the Auto Assembly 2009 script signed by all the cast including Gregg Berger and Ian James Corlett… and this was Gregg Berger’s personal copy! 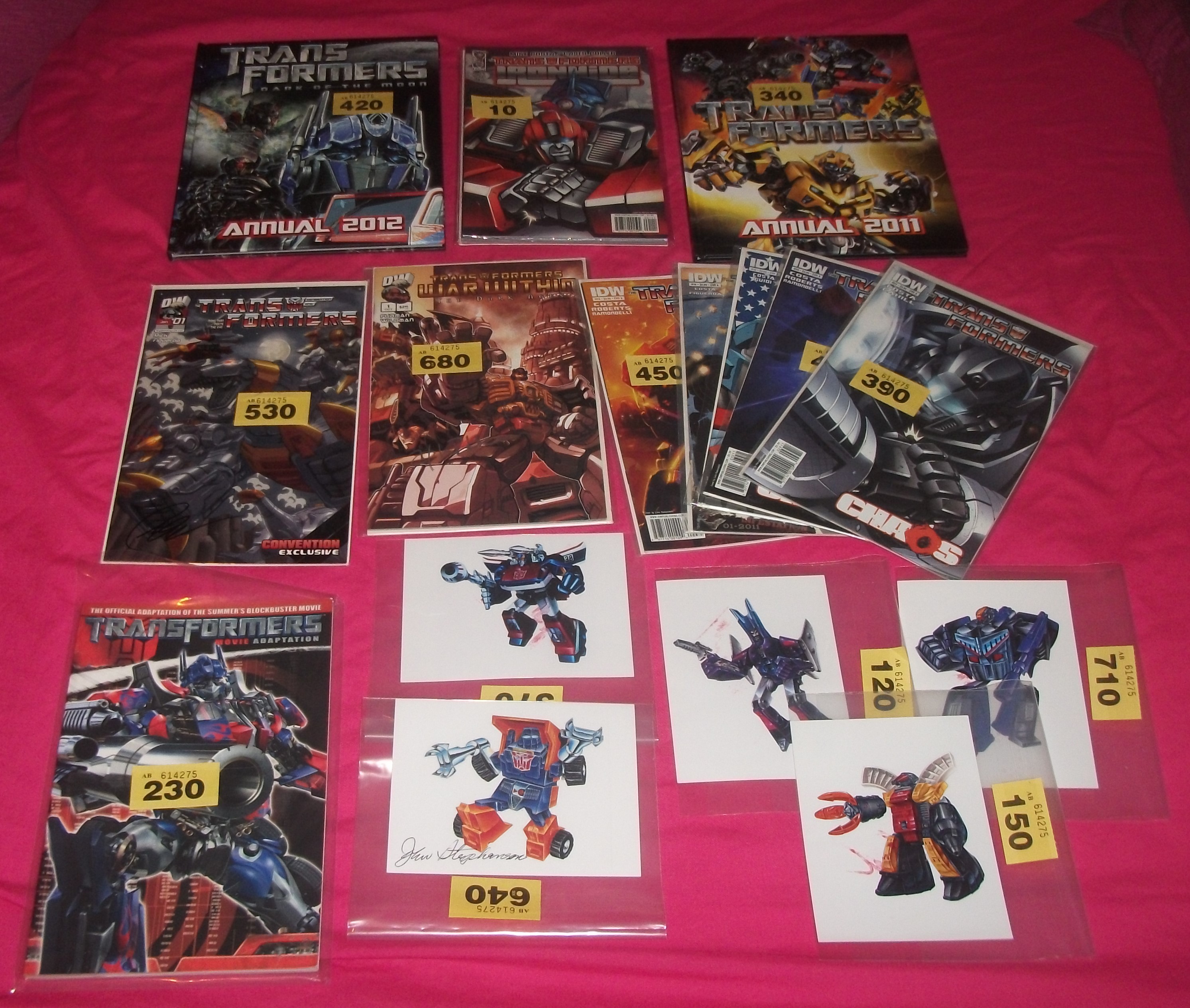 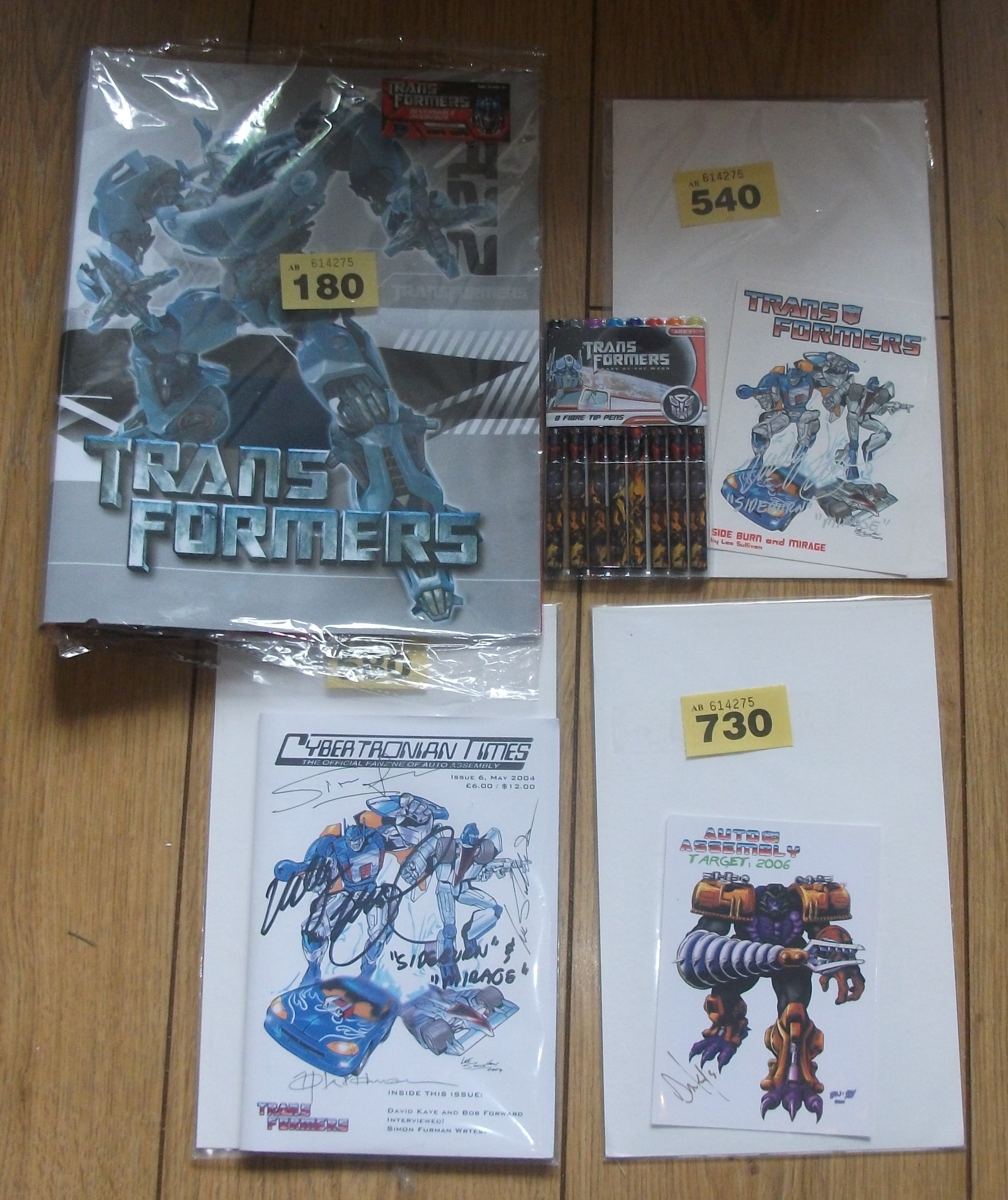 We want to thank all the voice actors and Hasbro UK for their generous donations of these prizes, as well as Auto Assembly 2013 attendee Chris Ford for his incredibly generous donation of all of the IDW comics.

We know that many of you may be thinking that it is a lot more expensive to take part compared with last year’s raffle (which cost 20p per ticket). We do appreciate this, but we have thought about this carefully and compared to last year there are already far more prizes on offer and everyone who buys a ticket has a much greater chance of winning (1 in 10) compared to AA2012. Last time with almost 2,000 tickes sold there was only a 1 in 40 chance of winning so this time not only are your chances much greater, but if you win you’ll walk away with your prize straight away! What could be better?!

Anyway, we’ve still got loads more to come (and these photos don’t include rare promo DVDs, graphic novels and duplicates of some of the items that we have!) but we want YOUR donations to make this the best set of prizes ever for Auto Assembly. If you have anything that you can donate, please get in touch. The only things we ask is that they are brand new and in excellent condition and that you can send them to us before the convention as they need to be labelled up and prepared as you can see from the photos. Other than that, what you donate is up to you so please get in touch if you can help!